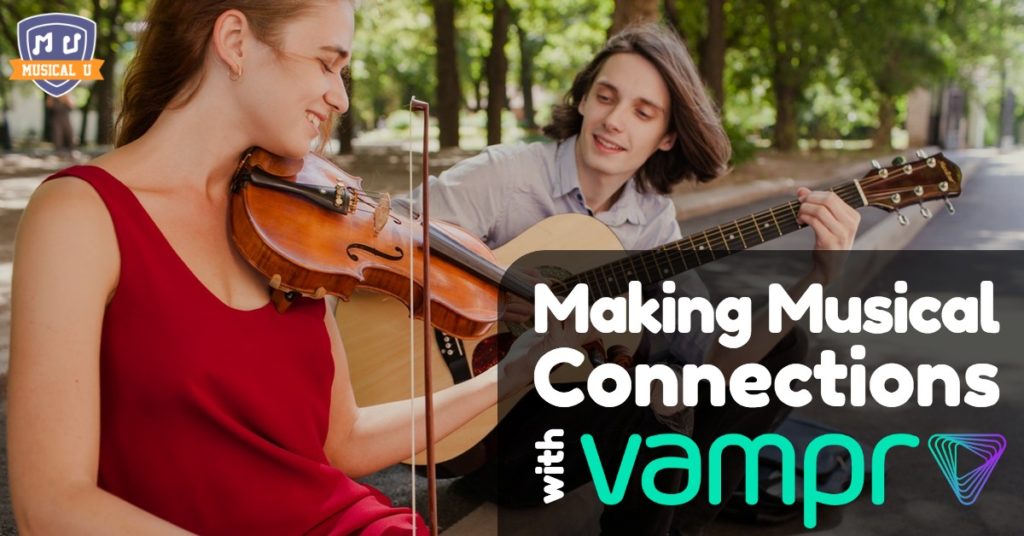 Ask anyone: finding bandmates, session players, songwriters, and other musical collaborators can be a lengthy, difficult, and frustrating process.

Where do you find the good bassists? How can you meet a producer who’s on your wavelength? Is it even  possible to find a backup singer who has the right vocal range and a workable schedule?

Enter Vampr, the missing link between you and your perfect musical collaborator. Simply set up a profile with links to your work, start browsing through potential collaborators, swipe right on those you’d like to work with, and let the magic happen!

The comparisons with Tinder will be aplenty – except this app isn’t a hopeful shot in the dark at a successful match. Vampr easily allows you to specify what you’re working on, who you want to collaborate with, and what your musical goals are. It also eliminates the issue of distance, by enabling you to connect with musicians that aren’t in your immediate circle, or don’t even live in your town – making it that much easier to find the perfect musical co-conspirator.

We spoke with Kevin Clobes, Vampr’s Head of Growth, to find out more about how the app works, the incredible connections it helps its users foster, and what’s next in store for this musical social network…

Q: Greetings Kevin, and welcome to Musical U! How did you come up with the idea for the app? Who are the founders and staff at Vampr?

Co-founders Baz Palmer (lead writer and guitarist of 12x platinum band Hunters & Collectors) and Josh met back in 2011 when Baz was scouting for talent to sign to his then-indie record label. He offered Josh his first ever recording deal and break. Both of them worked together in that capacity for over two years, releasing an album that went on to have millions of streams and touring for another two years. Following the album cycle, they launched Vampr, becoming business partners and deciding to embark on that journey together.

Both Josh and Baz understood the pain of getting started in the music industry and wanted to address it with urgency.

Additionally, they have experienced the benefits a network of like-minded and influential individuals can bring to one’s artistic endeavours. It is their own personal experiences that inform the app, and their credibility in the space that gives them a genuine voice.

Q: You’re the Head of Growth at Vampr. Besides being a musician yourself, you’ve reached out to help others through the company. What do you personally see as the biggest problem faced by musicians today?

I would say there are two main and equally daunting problems faced by musicians today. 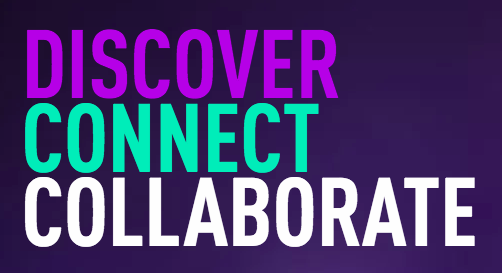 The first is the barrier to making connections. A majority of musicians out there do not know where to begin and do not know others with the experience needed to help them explore their passion.

The second issue is location. Even if a musician has said connections, a lot of the time, they live in areas where they cannot properly network or access those connections.

With Vampr, we are bridging these gaps by allowing our users to network with other musicians they would not otherwise be able to meet. We are making location and lack of connections irrelevant by immediately allowing musicians to contact those they need to right from their phone or tablet.

Q: Let me play Devil’s Advocate for a second: with today’s DAWs, musicians can conceivably do everything themselves without the hassle of finding other musicians to play on their tracks. So why collaborate? 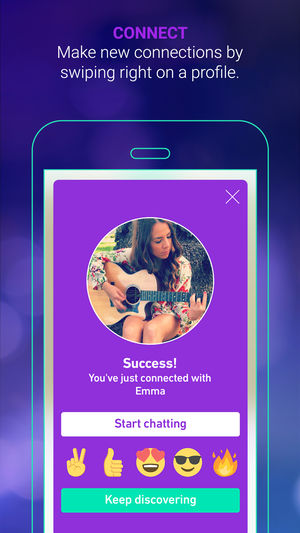 There will never be a technological solution to the creative process.

Even with those producing strictly in a DAW, we often find that we cannot get those drums sounding just right or are having trouble composing a bassline. Collaborating will always be beneficial in these situations because it adds another creative influence to the project.

Generally speaking, a collaborator may bring a whole different outlook or perspective to your project that you might not have conceived on your own. In addition, your collaborator might just have the connection you are lacking to get your music or project off the ground, and into the right hands.

Also let’s not forget, the days of being in a band are not over, and often, people are still looking for other drummers, singers, guitarists, and other instrumentalists.

I would also suggest that as the DIY musician transitions from the bedroom to the wider community (i.e., by playing shows and getting exposure on local radio), they will need support from publicists, graphic designers, managers, roadies, and so on. That’s where Vampr can be their musical companion throughout their careers.

Q: Fantastic. Can you tell us how exactly Vampr solves the problem of finding musical collaborators? 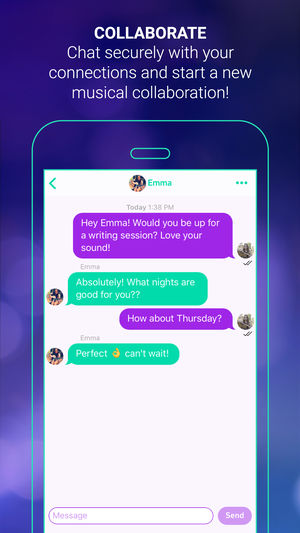 Let’s say you are visiting Orlando, Florida for a gig and need a bass player to perform with there. You can simply input that you are looking for a bass player in Orlando and you can start swiping through results immediately. If you are looking for a videographer for your next music video in Los Angeles, plug in those details and connect with one straight away. The possibilities are endless when searching in Vampr.

With technology constantly advancing, you no longer need to be in the same location in order to collaborate with others. These days, everything can be done over the computer. Vampr is a place where musicians can establish those connections and start the conversation of possibly working together.

Also, instead of having to go to networking functions and live events to find others (which can be costly and time consuming), it can all be done with a few clicks – or swipes – on your phone or device.

Q: Many musicians end up finding collaborators by happy accident, or through Facebook, or even from a flyer on the street. Why is Vampr so effective, as opposed to, say, just poking around Craigslist or social media?

Vampr is significantly more efficient. Rather than scrolling through endless lists and wishing on a star that what you are looking for will have made or responded to a post, you can now narrow it down so you are only looking through options for what you need.

Our solution has been changing lives daily and we are confident we’ve honed in on the right approach to connecting this wildly fragmented ecosystem!

Q: So the app bridges gaps by providing a fantastic online ecosystem that brings together people of similar mindsets!

You spoke of forging connections through the app. Taking it one step further, can Vampr really help one break into the music industry? How?

Our user base includes numerous Grammy Award-winning songwriters and producers, established A&Rs, and record label executives. With our list of established industry figures growing by the day, one’s chance of connecting with someone of this ilk increases.

”We have seen people form bands, get placed on the radio and release songs on major platforms together as a result of Vampr.”

In fact, our CEO and co-founder Josh Simons recently took a shot in the dark and hopped on Vampr in hopes of advancing his songwriting career, which he is pursuing on the side of developing the app. He ended up connecting with Grammy Award-winning producer Anthony Kilhoffer of the G.O.O.D. Music camp, and subsequently producing a record called “I’m Fine” by Cyhi The Prynce feat. Travis Scott – a record that was also executive produced by Kanye West! Vampr made all of this possible.

Our new website will highlight similar stories from our user base, and we can’t wait to share it with the world.

Q: Tell us about some of the collaborations which have taken place between your users thus far. How have their lives and careers been changed?

Q: Amazing! In addition to collaborating with others, what else can you do with the app?

The app is also tailored towards music lovers. If you are simply looking to find some refreshing new music to listen to, the app acts as a music discovery tool. There are tons of fresh new artists on Vampr that are waiting to be discovered and our algorithm will suggest new artists based on your existing musical taste. Record labels, managers, and publicists can use this function to find the most relevant upcoming artists. We will be expanding on this in 2018 however it’s incredibly exciting what you can derive in data when you have a user base as large and engaged as Vampr.

Q: To give our readers an idea, on how large of a scale has Vampr helped foster connections? Where do you see this going in the future?

Think about that for a moment. In many of these cases, lives have been changed forever and the seeds of future mini-economies may well have been planted.

That can sound hyperbolic but when you look at the worth of a single valuable connection… take John and Paul for example. Their union went on to create over $50 billion in revenue for industries well past music – film, gaming, etc. It’s profound. We are excited to continue to dig into ways we can help connect this ecosystem and create value for all participants involved.

When a single solid connection is formed, all members of the industry benefit.

Q: That’s a pretty incredible thought – if John and Paul met without such a powerful networking tool, we can’t wait to see what other musical matches made in heaven result from Vampr.

Kevin, thanks so much for speaking with me today, and we look forward to trying out the app for ourselves!

Though networking events can be stressful and nerve-wracking, they can work wonders for your career if you play your cards right.

With Vampr, us musicians can enjoy the same benefits – though thankfully, without any of the dress shirts, bad wine, or awkward small talk – in one user-friendly app.

Start expanding your musical network by downloading Vampr on iOS or GooglePlay. With an interface that connects you with musicians with relevant skills and interests, you don’t have to spend time shooting in the dark – you’ll already know whether your musical sensibilities align with those of potential collaborators just by looking at their profile. Best of all, as Kevin illustrated above, you never know who you’ll end up working with – they may be just what you need to take your music project to the stratosphere.

Lastly, be sure to check out their blog – with such a rapidly-expanding music network and exciting things in the works, this is one company to watch. And you won’t want to miss a beat.

The creative alchemy that occurs when you find a great collaborator brings a whole new dimension to your music making. How did you meet your bandmate, co-writer, producer, or backing vocalist?