Home » How To » Song Writing » Learning to Listen: Lyrics and Melodies

Learning to Listen: Lyrics and Melodies 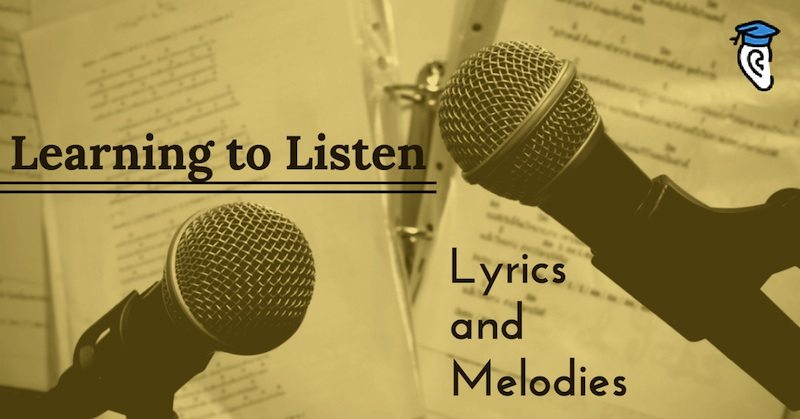 Most of us listen to music every single day. Songs we like, songs we don’t like, songs we have never heard before, songs playing in the background of our day that we don’t even pay attention to.

When you listen to a song, what exactly are you listening to? What do you appreciate about that song? While songs range in complexity and there is usually more than one part to the songs we listen to, the part everyone hears and tends to focus on is the melody.

The melody is the feature of a song, the red rose in the black and white picture, the part you sing along to. This is not to be confused with lyrics which are the words to a song, which, some people might argue is the most important part of the song. There can still be melody without lyrics, but there can’t be a song without music.

A great first step to learning to actively and critically listen to a song is learning what the melody is and learning to separate it from the lyrics.

What are you listening to?

When you’re listening to a song, do you listen to just the melody and the words, or to the song as a whole? It is true that bad lyrics can ruin a good song and their importance should therefore not be ignored. Yet at the same time there are many songs that have poor/nonsensical lyrics and are still good songs.

Starship – We Built This City

This song is a classic and just about everybody knows the words which, at best, are just fun to sing. There is little real meaning or coherence when analyzing the verses, pre-chorus, and chorus. With an easy-to-sing and catchy melody, a great bass line, and easily danceable rhythm it makes a great American pop rock classic.

Another catchy song whose lyrics don’t really make any sense! With a catchy piano hook and simple melody, this is another example of a song that’s fun to listen to but without much meaning behind the lyrics.

Then we have songs where people have taken spoken words and auto-tuned them to create a catchy song such as:

This song is a great case study for lyrics vs. melody. In the original video (the one without music), we watch as a guy films a rainbow and makes commentary on the whole situation. When The Gregory Brothers turned the viral video into a song they took snippets of the spoken phrases and auto-tuned it to add a melody. The song is extremely catchy. Of all the songs in this article, this is the one stuck in my head right now!

To further demonstrate the importance of the musical melody over lyrics, there have been several chart-topping songs that were in foreign languages:

For those of you that speak all three of these languages, hats off to you! These are three songs that were hits in many different countries some of which are predominantly English speaking listeners.

Finally, we have songs written for humour that (if you can look past the ridiculous lyrics and obnoxious hype) actually have pretty good music, such as:

Ylvis – The Fox (What Does the Fox Say?)

What Does the Fox Say? is a fun song that initially fell under the category of “ridiculous” and “overplayed”. Still, it was catchy enough to attract millions of listeners.

What we can draw from this is that when it comes to a song there is a very distinct difference between the lyrics and the melody, and how much they affect the success of a song. Without good music, the song dies and without music in general, the words are just a poem.

This is not to say that lyrics don’t have a very important role in some songs. For example, recent breakout artist Alan Walker wrote the song Fade and released it to find it rapidly rise in popularity in the electronic music community. Seeing its success he remodelled the song adding lyrics and his new version of the song, Faded exploded and is rapidly climbing the charts. Had he not added lyrics and a melody, we can assume that it would have only been popular in the club scene.

Learning to differentiate between the separate parts of a song will help you appreciate music even more. I challenge and encourage you to explore a song with all of its hidden parts that make it unique. The more you dive into music and try to dissect it, the more music exponentially expands.