Home » Podcast » About Learning Faster by Recording Yourself

About Learning Faster by Recording Yourself 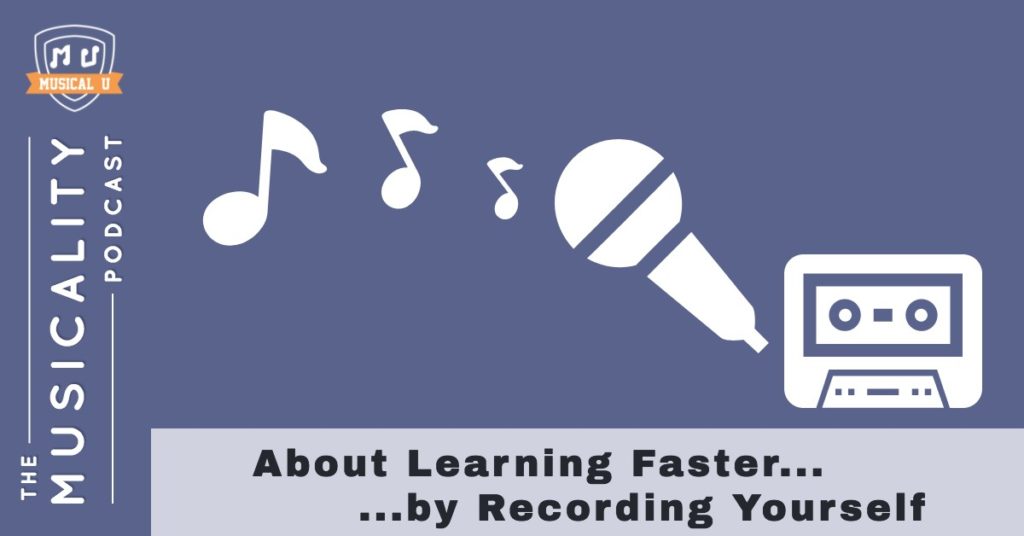 You’ve probably heard the advice that recording yourself during music practice can help you learn and improve faster. There are three big reasons to do it but recording your playing or singing can be scary! Fortunately you can make it easy. Learn how in this episode.

Today we’re going to be talking about why to record yourself during practice – and how to make it easy and enjoyable.

In my recent interview with Gerald Klickstein we talked about overcoming performance anxiety and making your playing more musical – and one technique he strongly recommended was to record yourself.

We talked briefly about how to make this easy, since so many musicians hate the idea of recording themselves playing or singing. But I wanted to unpack it in a bit more detail today because it’s one of those techniques that can really accelerate your progress – but is easy to overlook or shy away from.

So we’re going to talk a bit about why you might want to record yourself, then how to do it in terms of technology, and then what you can do to actually make it easy and not get caught up in mental negativity or anxiety when it comes to recording or listening back.

Let’s start with the “Why”

There are three major reasons to record yourself as a musician. And to be clear, we’re not talking about going into a recording studio or a sound booth and doing a serious production-quality recording. We’re talking about day-to-day recordings as part of how you practice and learn music.

The first reason is: It lets you improve faster.

You’ve probably had the experience of being in a lesson with a teacher, and you play through something, and they point out mistakes or opportunities to improve which you had been totally oblivious to while practicing it at home.

In fact, you’ll find you can generally hear your own mistakes and figure out how to fix them – but you never have the opportunity because your brain is mostly occupied with playing and so you can’t pay careful enough attention to listening too.

It is really important to listen as you play, but that takes practice and even once you’re relaxed with the piece and you’ve practiced active listening, there are going to be things you overlook while in the moment of actually playing.

Recording yourself allows you to stand in the teacher’s position. And although you may not have their experience or their well-trained ears, I guarantee you’ll be surprised by just how much you are able to hear and evaluate and correct by yourself.

That means you aren’t dependent on an occasional in-person lesson with a teacher to get the benefits of this evaluation. You can do it yourself, every day, and that means much faster progress.

The second reason to record yourself is one which Gerald shared in our interview.
He talked about how to overcome performance anxiety it’s a good idea to gradually build up the pressure of performance rather than diving in at the deep end.

Recording offers you a way to practice performing. You can set everything up as if you are actually performing for an audience, play through your pieces as carefully as possible, with as much musicality as possible – but the only person listening will be yourself, afterwards, with the recording.

Having only the recorder as your audience takes an awful lot of pressure off! But it still gives you a valuable step forwards towards performing in a confident and truly musical way.

The third reason is: It lets you actually hear your progress.

Don’t just record yourself and discard the recordings – keep them!

While at the time you might think you never want to hear them again (and I’ll talk more on that experience of disliking your own recordings in a minute!) actually if you keep the recordings they become an enormously powerful way to track your progress and enjoy the improvements you make.

That’s a really good feeling – but it’s one you miss out on if you don’t have the recordings and you’re relying on just your own fuzzy memory of how good you used to be.

One of my coaching clients on the Musical U Platinum program recently experienced just this.

But I gradually persuaded him to, for our ears only.

And he was telling me last week how he sat down and recorded a performance of one of the songs we’ve been working on, and immediately after he thought it was rubbish. He was really not satisfied and thought he probably wouldn’t even send it over to me.

But he went out to do some errands and when he got home a few hours later and listened back to the recording – he decided it wasn’t half bad!

Just that bit of time passing, and the ability to listen to himself not in-the-moment, but with his full relaxed attention let him hear the performance for what it really was.

Now if he hadn’t recorded himself he would have played through the piece, been dissatisfied, and spent the rest of the day a bit disappointed about his music playing. Because he did record himself he actually finished up the day being pleasantly surprised at the progress he’s made. And that was actually the more true and accurate judgement of his playing!

So those are the three reasons to record yourself:

Are you convinced it’s worth giving it a try? I hope so!

So let’s talk about how to do it, and how to make it easy.

How to record yourself

The most important thing I can tell you about how to record yourself practicing is: it doesn’t much matter!

Many musicians get hung up on this, worrying about having the right microphone, or a quiet enough environment, or what software to use.

The reality is: it doesn’t matter. As I said before, we’re not aiming for studio-quality sound here!

You’re recording for the sake of capturing a performance and allowing yourself to listen back. That means it just needs to be good enough to serve the three purposes we talked about: Helping you analyse and improve your playing, giving you practice at performing, and showing you your progress over time. That doesn’t require super great audio quality!

You can go old school with a tape recorder or video camera if you have one lying around.

Most people these days will just use their smartphone or tablet – they all have some kind of video camera and audio recorder app built in. It might be called “voice memos” or “voice recordings”. Keep in mind that the camera doesn’t have to be aimed at you! Even if all you have is the video recording app, that will do to get you started, whether you want to be shown on video or not.

You can also record yourself on a computer. Most laptops have a built in microphone, or you can use a webcam’s microphone or a plug-in mic if you have one.

There’s a great free piece of software called Audacity that I would recommend, or again you can use the built in apps. On Windows it’s normally called Sound Recorder, and on Mac you can use Garageband or Quicktime Player.

Remember: most of what you’ll be listening for would be perfectly audible on an old 1920s vinyl record recording – so your smartphone is more than good enough!

It is worth taking a couple of minutes to figure out where to best position your recording device so that the sound isn’t too loud or too quiet on the recording, and you might want to listen back on headphones to hear a bit more detail than a phone speaker will provide. But that’s about all you need to worry about.

Okay, so that’s the technology side of how to record yourself.

How do we make the emotional experience of recording yourself easy too?

Well there were two big tips which Gerald Klickstein shared in his interview:

The first was: Play something easy! Yes, recording can be a tool for improving the pieces you’re working hardest on, at the limits of your ability. But remember that being comfortable recording yourself is a skill in itself: so start small. Record yourself playing things you’re confident playing, and then build up to the more challenging pieces.

The second tip was really powerful: it was to not focus on the whole performance and judge how good or bad it was – but to instead pick one particular aspect that you are evaluating when you listen. For example, just focusing on rhythmic accuracy, or pitching, or how well you’re shaping each phrase. Isolating one aspect like that makes it far easier to stay objective and avoid the mind trash of worrying about being good enough.

I think those two tips alone will transform your experience of recording yourself and listening back, from something overwhelming and difficult into something quite relaxed and useful.

One thing I would add is a reminder that you are under no obligation to let anybody else hear your recording!

You might well decide you want to share it – but when you decide to record, it’s good to assume that you will be the only one hearing it. That takes a bit of the pressure off.

I’d also like to just mention that singers have a particular challenge when it comes to recording themselves – but I think we’ll save that for a future episode.

How to Learn Faster by Recording Yourself

Recording yourself as part of your practice has three major benefits:

The how-to of recording yourself is quite simple: whatever works! Tape recorder, smartphone, laptop or desktop – there will be a way to capture sound, save it and listen back. That’s all you need.

It’s easy to get caught up in emotional anxiety when recording yourself and listening back. Remember that you don’t need to let anyone else hear the recording. Start out with music you can play easily. And listen with a particular objective in mind, one single aspect that you’re trying to evaluate and improve.

I hope this episode inspires you to give recording a try! I won’t ask you to send your recordings in to me, but I would love to hear how you get on! Let me know by email to hello at musicalitypodcast.com.

Or, if you want a super easy way to make your first recording, why not send in an audio question or comment. If you head here you can record a little clip that we might feature in a future episode.