Learn to hear the 6/8 time signature 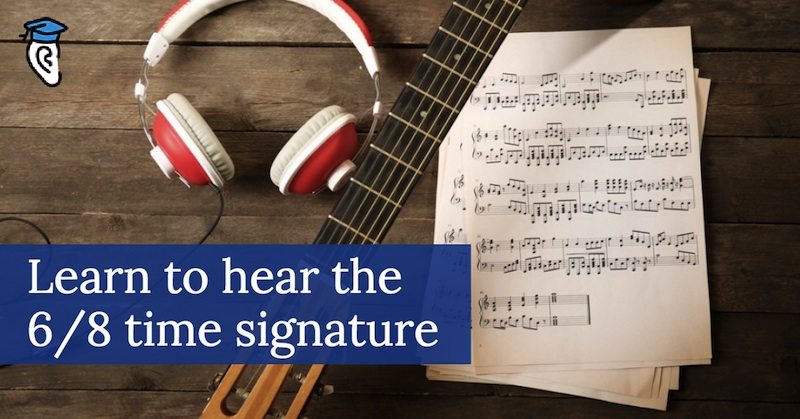 Although 4/4 is by far the most common time signature, another popular choice for music through the ages and including the modern day is 6/8. Why is this time signature distinctive, how does it work, and how can you learn to hear and play it? That’s what we’ll be digging into in this 6/8 tutorial.

Have you struggled to understand time signatures in music? Wondered why a piece is written in 4/4 instead of 2/2, or if a composer using 6/8 is just trying to make your life difficult? Time signatures are as fundamental to a piece of music as its key signature. Before you can worry about the intricacies of rhythm you need to be rock-solid on the underlying beat. To do that, you’ll need to know what the time signature is and how to count it.

We often expect pop and rock music to be written in the classic 4/4 beat, but it turns out a surprisingly large number of songs we all know and love actually use 6/8.

On first encounter 6/8 can seem complicated and even baffling but, as we’ll see below, there’s really not much to it and there is a fun and easy way to get the “feel” of 6/8 for your own music-making.

Read on for the essential explanations and then plenty of listening examples to practice with.

There are two ways to count a bar in 6/8 time. This can seem unnecessarily confusing when you first encounter 6/8, but as we’ll see the difference is not as big as it first appears.

You can either count it as:

At first this might seem like two very different ways of counting: in the first case you’re counting out six beats every bar, while in the second case just two. However, when you count all six you actually emphasise beats 1 and 4, so it’s more like 1, 2, 3, 4, 5, 6. Those two places correspond to where your two dotted-quarter note beats would fall so you are emphasising those two beats even if you’re counting out all six.

Likewise, when you count just the two beat version, in your head you would actually be thinking of the subdivision of each of them into three, meaning you’re feeling each of the six eighth-note beats even if you aren’t speaking them.

So whether you count out all six beats or just the two emphasised ones, you are still feeling the same pattern: two groups of three eighth notes.

Why are both options used? It mostly comes down to tempo, and sometimes the musical arrangement. When the piece is very fast it’s too much of a mouthful (or mental challenge) to count out every eighth-note beat and it’s easier to just count the two emphasised beats each bar. Some pieces have an arrangement, for example a guitar strumming pattern, which gives a musical feel that matches one style of counting or the other. Read on for some song examples.

One other area that causes confusion with 6/8 is: if you’re counting just the two main beats, isn’t that the same as a 2/4, two beats per bar?

The answer lies in the subdivision of the beats. We call 2/4 time “simple duple” meaning there are two beats per bar and each beat divides in two (the “simple” part). By contrast, 6/8 time also has two quarter note beats per bar so it’s “duple” too, but each one divides into three, making it a “compound duple” time signature.

The difference between 6/8 and 2/4 time signature

Similarly, you might wonder if those 6 eighth notes could be grouped together as three groups of two rather than two groups of three.

Well, you could group them like that, but because you’re dividing each of the three beats into two, it’s then “simple” meter again. With three beats each divided in two, what you actually have is 3/4 time!

This is the difference between 3/4 and 6/8. Although it might seem like numerically they are interchangeable (there are six eighth notes in a bar), the grouping is different. If the rhythms used in the piece group emphasise the first and fourth of those eighth notes, implying they are grouped in threes, it’s 6/8. If the rhythms emphasise just the first (and perhaps the third and fifth), it implies the eighth notes are in groups of two, and the time signature will be 3/4.

The difference between 6/8 and 3/4 time signature

What we’ve covered above is pretty much all the music theory behind 6/8. As you can see, there really isn’t much to it! Apart from the small points of confusion noted here, it’s not actually the concepts which cause trouble for musicians.

The challenging part of 6/8 time is learning to recognise it by ear, or learning to express it yourself when reading from sheet music.

That requires the basic theory understanding covered above, but it mostly comes from getting very familiar with the feel of 6/8.

How to hear and feel a 6/8 time signature

There are a few clues that a song is in 6/8. These are also things to think about when playing 6/8 yourself.

Another useful word used to describe 6/8 is shuffle or lilting. It feels looser and a bit more playful than a 3/4 time signature.

You can hear how the bars each split into two halves. You might even initially hear it as two separate bars of 3/4 time (“1,2,3, 2,2,3”) before realising that the bars always pair up in twos. You can also listen for how each emphasised beat sounds a bit like a triplet because it’s divided in three rather than two. It would be easy to initially think a 6/8 song was actually a song in 2/4 (or 4/4) which used a lot of triplet rhythms.

You won’t have to think through the steps like this for long. In time you will just instinctively recognise the 6/8 pattern when you hear a song.

Ultimately the best way to get the hang of 6/8 is just lots of practice. Choose to play pieces in 6/8, or simply listen to songs in a 6/8 feel and practice counting along with the beat. We’ve collected a number below for you to practice with.

Here are a selection of songs you’ve probably heard before which use a 6/8 time signature, along with some notes on each to help you tune your ear in. They’re roughly grouped into similar musical style so that you can hear the commonalities and variety in the way musicians use 6/8.

Neutral Milk Hotel – In the aeroplane over the sea

The guitar strum pattern in this one is great for hearing that 2-beat split: the first beat of each set of three is emphasised clearly and the chord moves with each bar so you can easily listen for the slow beat of two dotted-quarter-notes on each chord. It’s at about 60BPM so a dotted quarter beat happens about once per second and each bar takes about two seconds.

A similar guitar-based 6/8 but the beat here is implied a bit more loosely. Here the snare of the drum beat could actually throw you off a bit because it actually isn’t emphasising every beat or every third beat as you might expect. Try to ignore it!

The Beatles – Norwegian Wood
Note: this video is a tribute version.

Queen – We are the champions

A good example for counting as a straight 6 (1,2,3,4,5,6) as the half-measure divisions (i.e. the dotted-quarter-note beat) aren’t as clear in this one. You can hear them in the instrument hits on “share of sand kicked in my face“ and somewhat emphasised in the drum part after that.

Animals – House of the Rising Sun

A fast 6/8, this one. Listen for how the slow broken chord on guitar (in the introduction and then throughout) starts each chord on the “1” and peaks on the “4” of each 6/8 bar.

Metallica – Nothing Else Matters

Here’s a second guitar arpeggio example to follow. The first four bars of the introduction is simply an arpeggio on the eighth notes of 6/8: count 1,2,3,4,5,6 each bar. In the main section of the song you can listen for the 6/8 quavers on the drummer’s hi-hat cymbal.

Ignore the introduction and bridge which throw in some extra beats; the verses are a stripped-down 6/8 and the chorus a slightly busier one. Listen to how the slow drum beat in the verses creates a slow 2-beat framework and the guitar hints at 6/8 within that.

Seal – Kiss from a rose

The verses play around with the beat a bit but the chorus is a clear 6/8. The medieval-sounding “bah-ya-dah” refrain will help you connect this up with the traditional classical music uses of a 6/8.

Wings – Let me roll it

In the introduction the prominent organ moves slowly and even the guitar is pretty static in the first half of each bar – but listen to how the guitar and bass fill in beats on the “4,5,6” to make clear this is a 6/8, and how the drummer’s cymbal taps out those subdivisions that tell you this is 6/8 and not 2/4. After the introduction this becomes a nice clear example of the drummer keeping the 6/8 eighth note beat on the hi-hat 1,2,3,4,5,6.

A busier drum part in this one and it’s the the drum and vocals together which create the 6/8 shuffle feel. Listen to how the bridge (“Uptight” at 1:26) shifts the beat – you can still hear a 6/8 but it feels almost like a half-speed tempo change, and more like the two dotted-quarter-note way of counting.

Note: Skip in a minute or so to reach the main song.

Although the guitar arpeggiates the six eighth note beats the sparse arrangement and quite loose beat here can make it hard to hear. In the instrument fills between the chords and next verse listen for the alternating bass part in the guitar, back and forth between two notes to tune you in to the underlying 1,2 beat.

The Postal Service – This Place is a Prison
Speaking of “sparse”, this is one to test you.

The vague synthesiser accompaniment and vocal part don’t give you much to work with in figuring out the beat! Fortunately that distorted synth percussion beats a fairly clear 6/8 beat.

Christina Aguilera – You Lost Me

A piano pop ballad example with an interesting twist: the piano part suggests the 6/8 is broken into 4 beats followed by 2 beats rather than two sets of three. It’s interesting to listen along to the first part of the song, interpreting the beat as 1,2,3,4,1,2 vs. 1,2,3,2,2,3 along the way.

A different kind of pop piano ballad, here with a drum part playing a syncopated pattern on the 6/8 beat.

If you have Spotify you can listen to all of those on this handy playlist of 6/8 Songs.

Go forth and love six eight

Are you getting the feel of it? With the basic music theory above, some tips on how to count and feel a 6/8 time signature, and a range of popular music to practice along with, you are now well equipped to make sense of 6/8 time. Bonus points to you if you read the heading above and instinctively emphasised the first and fourth words.

Time signatures are fundamental to music-making and though it can be tempting to gloss over them, their importance should not be underestimated. Learn to recognise one of the most popular and interesting time signatures, 6/8, and your own musical instinct and versatility will be greatly enhanced. Have fun with 6/8 in future!


Musical U is the all-in-one training website which helps you to become more musical in an easy, fun and personalised way.