Home » How To » Song Writing » How to write better songs (…by developing your ears!)

How to write better songs (…by developing your ears!) 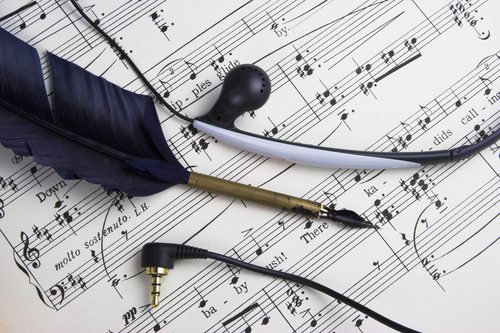 Songwriting and ear training are two concepts that are strongly linked together, which is often overlooked. The goal of songwriting is to create music for an audience to hear. The goal of ear training is to develop a sense of hearing better able to listen to musical ideas.

A musician with better ear training is going to be better at listening to songs written by others for ideas. In addition, it helps to be able to objectively listen for those same ideas in your own songs. There are few areas of ear training in particular where songwriters should focus.

The pitch and rhythm of notes are an important aspect to writing a song, but dynamics also play a substantial role in songwriting. Dynamics is the area of music where a songwriter plays with how loud a song is. This is not necessarily the same idea as altering the volume of different instruments in a mix, but it can sometimes be related.

The ‘palm mute’ used by guitarists is an example of a guitarist using dynamics to alter a part. Both examples below are A power chords played with a straight eighth note pattern. The second example uses a power chord to introduce a dynamic change. There is no chord or rhythm change – but the dynamic change from the palm mute changes the line by accentuating the first downbeat and second upbeat of the passage.

Dynamics are not limited to a single part in songwriting. The most common example of this is that it is very common for the chorus of a song to sound louder than the verse section. There are different ways of accomplishing this, but the overall idea is common. In some cases, it might be a change in dynamics for one or two instruments. In other cases, the songwriter might add extra instrument or vocal tracks to the chorus section. For example, having backup singers start to sing during the chorus.

There are a large number of songs that have good examples of dynamic usage. Examples:

These are all good examples of dynamic changes. Virtuoso level players on almost any instrument will typically use this heavily in just about any solo piece he or she performs.

Note identification in ear training occurs as either relative pitch or absolute pitch. Relative pitch is the ability to identify a note in comparison to a reference pitch, usually the root note of the scale. Absolute pitch is the ability to identify a note without any reference pitch. Relative pitch is almost exclusively the easier method of note identification for more musicians. From a songwriting perspective this is actually a good thing! There are applications for absolute pitch, but songwriting is typically not one of them.

The reason notes sound the way they do in a song has little to do with the actual note itself. The distance a note is from the root note causes notes to give the unique musical impression each one has in a song. For example, the A note will sound quite different in a song in the key of A minor than a song in the key of C major. However, the fifth note will sound pretty much the same in any song, regardless of the key. The identity of the note will change, but the distance from the reference pitch will always be the same.

This is why it is possible to change the key of a song while still allowing it to be recognizable. A good example of this is the Kinks and Van Halen version of “You Really Got Me.” Both are recognizably the same song, but the songs are in different keys.

Listening to songs will not usually help too much with ear training for relative pitch. This is primarily something that develops with practice playing an instrument. Most songwriters and composers can play at least one instrument to some extent, and this is an area of ear training for songwriting where that’s important.

Song ‘flow’ is an aspect of ear training and songwriting that is fairly esoteric. This is the ability of a song to smoothly transition from one section of the song to another. It is important aspect to songwriting, but one that only comes with practice and experience. It takes a decent amount of ear training just to hear if the song flows well from one section to another. Any song with two or more distinct sections has passages in the song to allow one section to flow to the next. The best way to develop this skill is to listen to songs and try to hear how the songwriter transitions between sections. Focus on the instrumentation when moving from the verse to the chorus, which is a fairly large jump in many songs.

Song flow is a difficult aspect of ear training and songwriting to understand initially. The best way to create flow from one section of a song depends on how the first section ends, how the second section starts, and the overall feel of the song. In some cases, the parts played by other instruments can also be relevant. This does become second nature with practice and experience. The more songs you examine and write, the less you will need to think to come up with a good way to transition between sections. In some cases, it might be better to stop working on a song for a few days and then work on the transitions after. Sometimes your ears get too focused on each section to write a good transition!

One key thing to remember is that songwriting is a skill that people develop with time and practice. Most songwriters only release a fraction of the total songs they write! Do not get frustrated if a song idea does not work or a song does not flow properly. Sometimes simply letting a song sit a few days without thinking about it can help you better listen to the problems with the song.

Have any top tips from your own songwriting experience? Just getting started and not sure how to improve or which skills to train first? Leave a comment below!