How to Start Sight-Reading Music in Choir 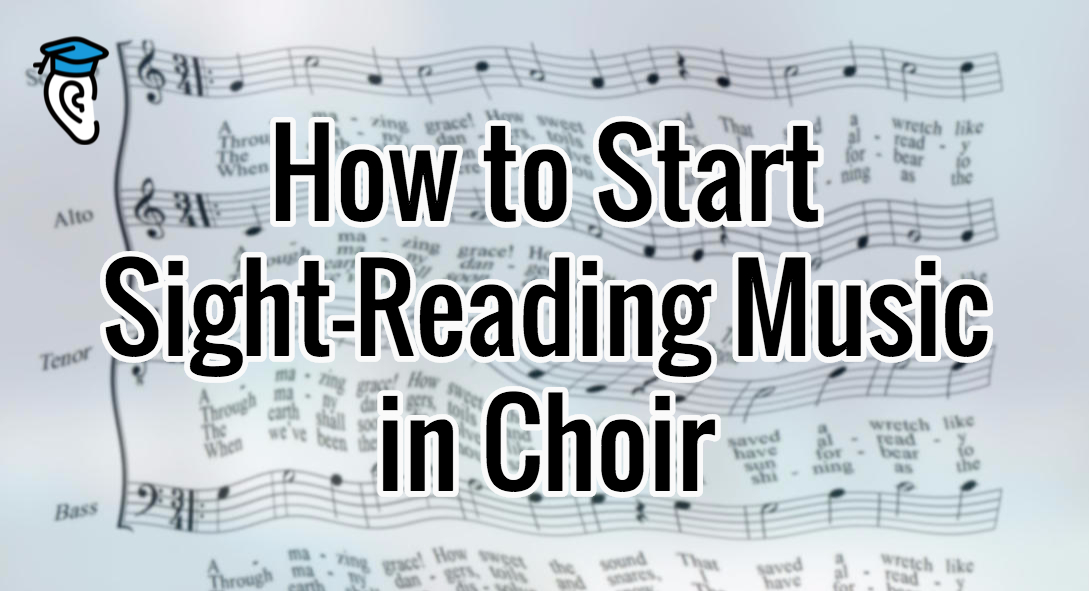 Today’s article is a guest post by Evan R. Murphy from SightReadingMastery.com, a fantastic website dedicated to helping you learn to sight-read music in an easy and enjoyable way. Look out for more information about this useful website coming here soon, but for now Evan has kindly agreed to help all you singers out there with one of the most common challenges: sight-reading sheet music in choir! Over to you, Evan…

Many people enjoy playing music by memory or by ear, but their relationship to reading music is something like this…

It’s understandable. Written music is a dense symbolic language that communicates a ton of information! When the system evolved and for hundreds of years, it was the only way to record music outside of human memory, so it had to be able to capture everything a composer might want to convey about a performance. There can be a lot of markings on a page of music, and some are pretty cryptic for the uninitiated.

The worst thing that can come from overwhelmed encounters with written music is that a person gives up altogether. They come to believe that they can’t read music, that it’s too difficult for them. They pass up great opportunities to avoid the stress or embarrassment of facing the music (literally!).

Like a budding vocalist who joins a choir, thinking it might be a fun way to try out their new singing skills. At the first rehearsal, they’re handed a stack of sheet music and get intimidated looking at it. “I don’t know how to read this…” They spend the whole rehearsal caught up in their own fear and self-consciousness and have a miserable time. After that, they resolve never to go back. They’ll just sing to themselves in the shower from now on. What a tragic and unnecessary fate!

Helping people read music is my job, so it pains me to see this happen. I know how rewarding it is once you get past the initial hump. There are different tricks and strategies for getting there depending on which instrument you play and what context you’re in.

This article will focus on singers. I’ll assume that you have some experience singing but zero experience reading music.

This article won’t teach you everything about reading music, but it will teach you more than enough to walk into your first choir rehearsal tomorrow and hang with the group on unfamiliar sheet music.

So let’s take a look at some sheet music you might encounter at a choir or singing group (click to enlarge): 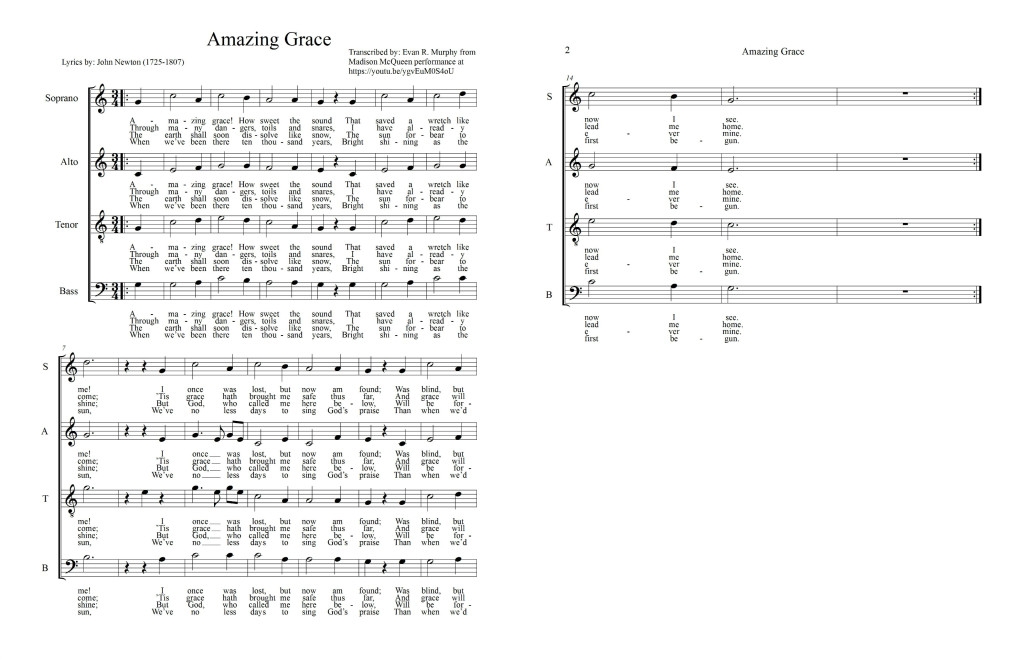 You might recognize this song from the title :) But wow, that’s a lot of markings. How do we begin to read this?

Making 75% of it disappear

In choir music, when vocalists sing the same notes and words, they’re said to be on the same “part”. There can be any number of parts, but there’s a heavy slant in Western choral music toward four parts. From highest to lowest in vocal range, these are: soprano, alto, tenor and bass. Find the part that best suits your range, or one that you can handle where you’re needed most (tenors and altos are often in short supply, for example).

The music above reveals a convention that’s unfortunate for beginning readers. Sometimes you’ll be lucky and it will just contain your part, but often (as here) it will show everybody’s. Worse, sometimes multiple parts will be crammed onto the same staff with each other and not even labeled! The nice thing is, if you just focus on your part and ignore the others, then 75% of the notes disappear. Let’s see what it looks with just the tenor part, which in this arrangement of “Amazing Grace” carries the melody: 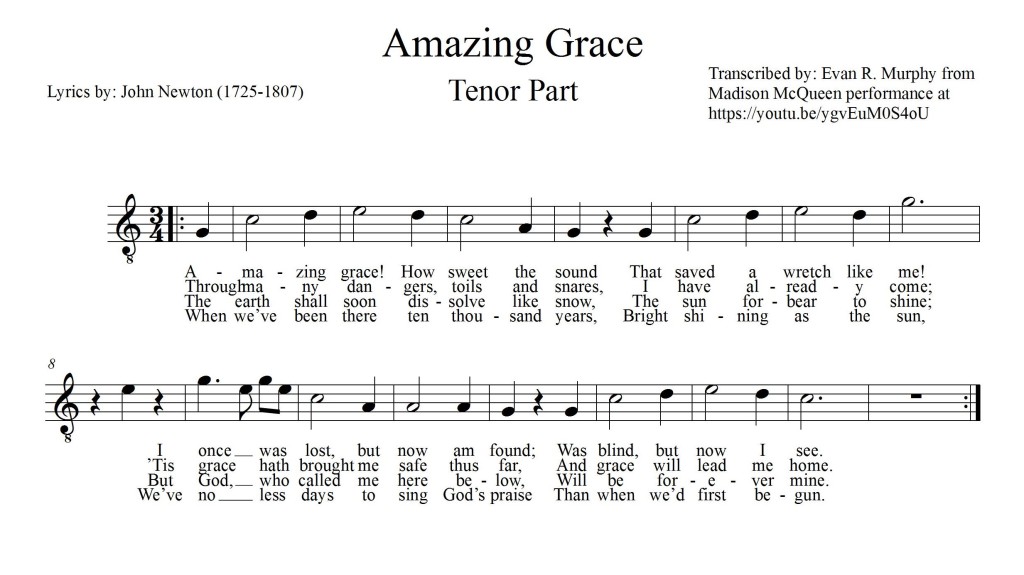 Ah, much better! It looks so much shorter and simpler. Do you see how this matches up to the tenor part’s row of music in the full score (the first “Amazing Grace” image above)? When you encounter other sheet music with multiple parts, do the same thing in your head and make all the parts disappear except yours. Then it becomes significantly less overwhelming.

Words are a singer’s best friend

Music notation is a new written language that you’re learning. Fortunately for singers, it’s typically accompanied by another language that we’ve been trained to read all our lives and most can sight read perfectly – English!

(Note: If English isn’t your first language or your choir sings in a different language from the one you speak, then that would be an additional challenge to reckon with! Let’s assume for now that you’re singing in your native tongue.)

With instrumental music, if you lose your place, your music reading skills have to be fairly developed to be able to find where in the music the rest of the group is. With vocal music, the words are always there to guide you. Take advantage of this unique benefit that singers enjoy!

It takes time to really learn how to read notes and rhythms, but you can learn in just a couple minutes how to look at a piece and deduce some important features of the music.

For notes, you can easily tell their relative pitch – whether they’re higher, lower or the same pitch as one another – because their vertical position perfectly mirrors this. Just pay attention to the note heads, the fat round parts of the notes, and don’t worry about the stems coming up or down from them.

As for rhythms, sometimes the horizontal position of notes and words will strictly mirror the rhythm (their occurrence in time maps exactly onto to how far left or right they appear in the music). But not all publishers follow this, so it’s not a reliable method. There is an easy rule of thumb though that’s surprisingly powerful for approximating the rhythms you read: the more complex a note looks, the shorter it holds for. What do I mean by this?

Ignoring the extraneous symbols and leaving only what we need to approximate pitch and rhythm, we arrive at this further simplification of the written music for “Amazing Grace”:

This is such an intuitive visual to sing from that it’s very similar to what the makers of the Rock Band game came up with for their popular video game where players can sing along. Notice they use strict horizontal position to illustrate rhythm as I mentioned above. If only we could depend on this in written music, they’d be identical:

Putting it all together

So imagine you’re in choir rehearsal now and you’ve been given this sheet music to sing. Mentally you’ve transformed it from the wall of symbols and text it appears to be at first glance into the more intuitive representation we derived in this article.

If you were tasked with singing this alone, there would be some guesswork involved, as we’ve only learned to approximate pitch and rhythm in this article. (You’ll have to further build on your sight singing skills to be able to precisely determine what music should sound like just from looking at its written form.) But when you’re singing with a group, part of the beauty is that you’re not all alone, so you can lean on other singers a bit.

What we’ve discussed so far equips you to have a pretty good sense of what will happen in the music before you’ve heard it or sung it. Then you can use your singing ear training to match pitch and rhythm with the other singers on your part to understand exactly what is happening. With practice, you’ll get better at holding your own part without depending on someone else to get it right first.

Let’s give it a try. Imagine the YouTube clip below is your choir. It’s a beautiful performance of the “Amazing Grace” arrangement that we’ve been looking at together.

Grab the sheet music to your favorite part using the links below. Then I encourage you to warm up your voice, start playing the video, and trying singing along as you read the music!

I hope you enjoyed this post and found it useful. If so, do you have any friends who sing but aren’t sure how to read music? Please consider sharing it with them. Also, feel free to email me at evan@sightreadingmastery.com to let me know what you thought and if you have any questions. I’d love to hear from you!

Thanks, Evan!
So, are you in a choir or singing group yet? If not, it’s time to get out there and find some people to sing with! It’s a great way to have fun and grow musically, and you have no excuse to be scared of sheet music after reading this great tutorial!

Evan is a musician, music teacher, software engineer and the founder of SightReadingMastery. Realizing how important sight reading is to unlocking opportunities in music, he started SightReadingMastery in 2011 to help musicians develop this valuable skill. He currently lives in Seattle, Washington with his fiancee Rebecca.