What comes to mind when you hear the word “romantic”? A sunset walk on the beach? Wine and candles? Classical music history has a whole style period known as the “Romantic era.” While the biographies of its composers reveal plenty of drama and romance, the astonishing depth and breadth of their musical output expand way beyond dinner and a movie.

The Romantic era in music history aligned with tumultuous political and social times. The music itself is often associated with the 1800s, but in actuality, “romantic” music includes transitional composers and compositions from the very late 18th century. In fact, it’s best to broadly “bookend” the Romantic era, connecting the emergence of a new aesthetic in music with the outbreak of tension related to the beginning of the French Revolution in 1789. The last gasps of romanticism actually competed with modernism in music, which surfaced in the early 1900s.

A New World for Composers

At the turn of the 1800s, western Europe saw upheaval in its economic foundation which left composers high and dry as “old” money disappeared with the original aristocratic patrons of the arts running scared from Napoleon. Composers were forced to turn to the emerging middle-class consumers for support, navigating the perils of that fickle public by cultivating a memorable charisma and by relying on a display of astounding performance skills that might gain attention – and then provide sustenance in tight economic times.

Following Beethoven’s lead, composers left behind the Classical-era composer’s self-image as a highly-trained craftsperson and often thought of themselves as heroes (or anti-heroes). This played into the nascent market demands for larger-than-life celebrities.

This middle-class population could afford tickets to public events like symphony and concerto concerts, piano and vocal recitals, and even operas; those same consumers, in turn, sought private instruction in hopes of boosting their abilities for playing at home the music they heard on stages. 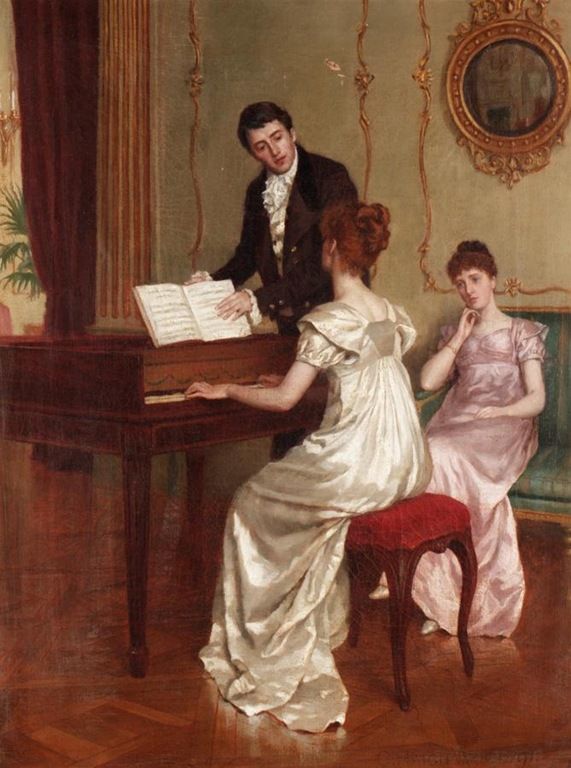 The cycle becomes ever clearer when we consider how anyone taking private lessons naturally needed sheet music: people sought to purchase the pieces they heard in concert from local publishers, aiding a surge in the printing and publishing industry.

Simultaneously, the artist’s business senses sharpened: the savvy composer worked all of these available avenues in an effort to enjoy some name recognition and perhaps to secure a place in the rich history of western European music.

The “who” of romantic-era music became ever more eclectic in the 1800s, as artists in many regions were displaced by political conflict. The great pianist-composer Chopin, for example, native to Poland, settled in Paris thanks to the 1830 Warsaw Uprising. This homesick composer often created from a place of nostalgia and thus practiced cultural patriotism via a use of dance rhythms or musical forms typical of his native land. European audiences and their open, “enlightened” minds, in turn, craved the exotic element that these nationalist composers brought to local urban stages. It was a match made in heaven!

The romantic-era composer had at his or her disposal a number of genres, including: 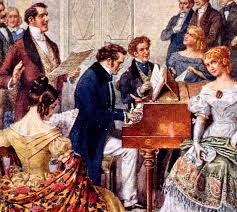 Two “miniature” genres also proved captivating – and helped sustain publishing businesses all over the continent and beyond:

Across these representative genres listeners can track specific musical traits:

Let’s listen to some Romantic era music and see how these characteristics play out: 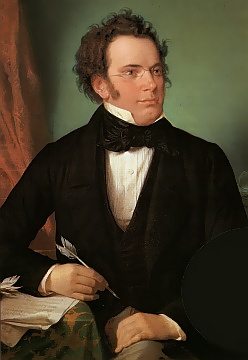 Franz Schubert (1797-1828) worked in Vienna post-French Revolution where he created large and small musical works like symphonies, piano sonatas, and string quartets. Schubert was fond of intimate gatherings for music-making, instead of working the public venues more typical of the age. In this private environment, it was his songs for voice and piano, or Lieder, that proved the ideal fit.

The standardization of this genre was made possible in part by a new literary trend: German writers like Goethe and Schiller built their contemporary poetry on their fascination with Germanic legend, nature, and the supernatural.

Schubert also took advantage of a new and improved piano as partner to solo voice, celebrating its potential for dramatic effects via sustain, color, and articulation.

Schubert’s innate ability to craft leisurely, singable melodies was unsurpassed, and he deployed that artistry across 600 Lieder. In the Lied “Erlkönig” (“The Elf King”) (1815), Schubert also demonstrated his dramatic capabilities. This is a four-minute mini-drama, where one singer portrays multiple characters (narrator, concerned father, sick son, and the “Erlkönig” – a supernatural figure trying to lure the son toward death).

The first 25 seconds are crucial, as the piano introduction, via accompanimental triplets, sets the scene. Note the minor key: it is a dark night and a frantic situation, and the “galloping” motive depicts father and son riding for help as the boy teeters on the verge of death.

The father’s first utterance comes at [0:55] with the words “Mein Sohn” (my son) and the boy responds at [1:04] with “Vater” (father). The dialogue continues with the father’s comforting words at [1:18], reinforced by the move to a lower range. Catch the seamless modulation from a minor to major key, notable from [1:18-1:24]; this fresh, bright sound depicts the Erlkönig as he first addresses the child, insisting that he join him on the “dark side.” 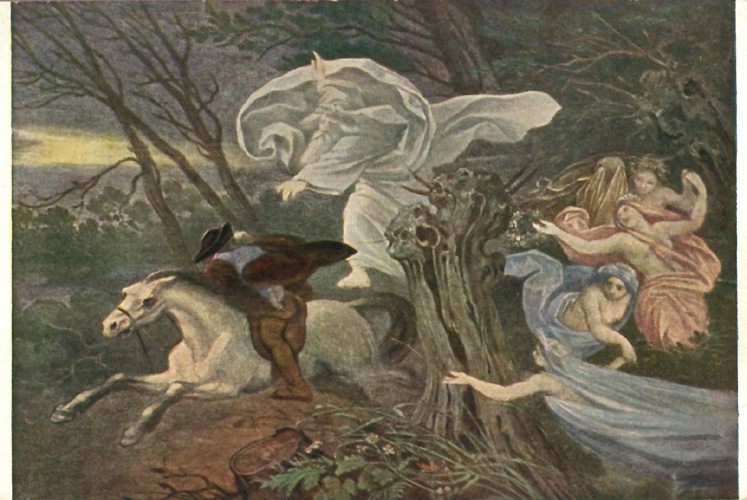 By [1:51] the harmony has already shifted back to minor to express the anxious child’s growing fear about the apparition before him. He is once again comforted by his father’s soothing tone at [2:02].

The dialogue continues, as does the pattern of modulation with a move to major at [2:12]. The Erlkönig once again encourages the boy to join him; this time, though, he coaxes at a softer dynamic level which will build to a mezzo forte as he pushes his agenda. Note at [2:30] how Schubert depicts the terrified boy with a slight uptick in tempo and a more intense vocal style. Through all of this, the horse continues to “gallop” via the left-hand triplets, even as the Erlkönig at [2:58] reveals his ultimate frustration.

The song is through-composed, which means no large-scale repetition, but the galloping figure creates a sense of unity even as key centers and characters constantly shift for dramatic effect. The night ride is nearing its end by [3:22] and the narrator re-enters to explain the father’s next course of action. At [3:44] the horse slows to a halt (the piano grinding to a static pulse) to indicate they’ve reached their destination. The direct statement at [3:55] reveals a sad truth: the Erlkönig has managed to lure the boy to his side. The child is dead.

Romantic composers and audiences loved extremes. The brief but compelling Lied represents the intimate miniature side of the romantic aesthetic. On the monumental side, Beethoven had already built the symphony genre to previously unheard-of monumentality in the classical era. Romantic composers followed his lead and further expanded and innovated on the massive symphonic form.

March to the Scaffold 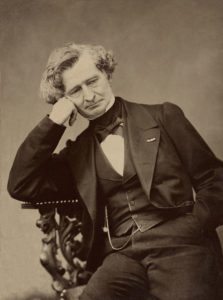 Hector Berlioz came to music study later in life than many master composers, which positioned him outside of mainstream traditions and beyond the reach of the constrictions of traditional training. Berlioz’s creative process was personal, and so was the resulting music.

Berlioz’ 1830 Symphonie fantastique proves unique in many ways, not the least of which is the programmatic conception at its narrative core. Program music is the label for an instrumental piece that has an “extra-musical” association as its starting point: maybe the composer was inspired by a journey, an image, or a literary work.

In Berlioz’s case, his own love life comes into play as the symphony, without the benefit of a sung text, narrates his disappointment about a love unreturned. Ultimately, Berlioz turned to melodic, timbral, and textural devices to relate an “episode in the life of an artist.” All five movements (Berlioz expanded the standard four-movement symphonic form) have some iteration of his “idée fixe,” or “fixed idea” – a melody he crafted to represent his beloved (the very woman who spurned his advances).

In this fourth movement, the artist (again, Berlioz himself) even imagines he has killed his beloved and that he is being marched to the scaffold to face execution for his crime. The brisk but strict duple meter indicates the left-right motion of a march. Note how at [0:37] Berlioz relies on the bassoons for countermelody, indicating a fascination with pushing instruments to the forefront that are normally reserved for accompaniment. (Bassoons are featured again from [1:08-1:20].) 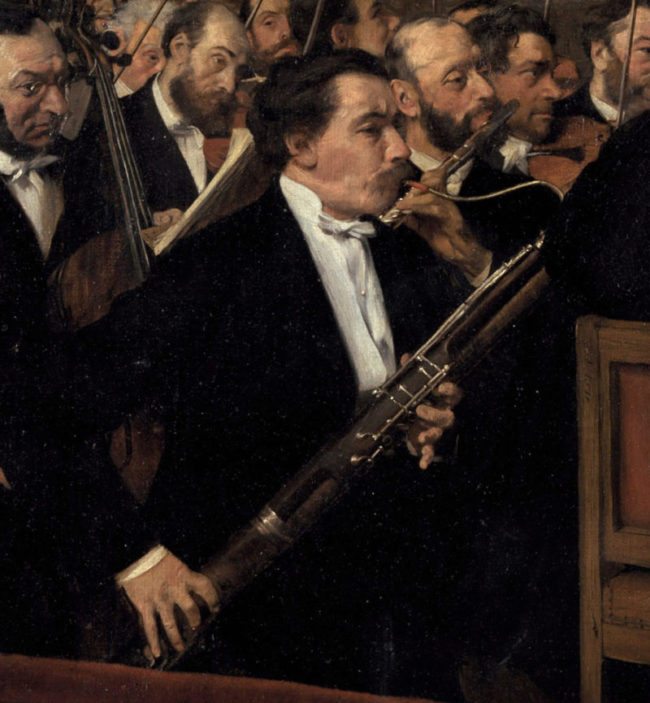 These lighter passages give way to brass blasts at [0:49] and [0:56], then an official return to a full orchestral sound comes at [1:24] with a bold brass, winds, strings, and percussion contingent. The passage indicates clearly that Berlioz has greatly expanded the “norms” of the symphony ensemble.

At [2:26] Berlioz reveals his intent to create drama and atmosphere via certain instrumental effects: the pizzicato strings and staccato descending melody foreshadow the artist’s imminent demise. Listen from [2:45-3:30] for a contradictory ascending theme and rushing tempo, complete with cymbal crashes on certain downbeats, paving the way for a triumphant statement of the fixed idea at [3:32] by a solo clarinet. This poignant melody, made more so by an asymmetrical organization and syncopated rhythm so sharply contrasting the regular march meter, portrays the artist’s last view of his beloved, just before the blade falls, sounded at [3:37] with a huge orchestral punctuation.

The final fifth movement of the Symphonie Fantastique plays right into the Romantic-era fascination with the supernatural with a full-blown witches’ sabbath.

Whether writing for huge orchestras or intimate ensembles, romantic composers didn’t hold back from a dramatic, emotional take on the themes of love, death, nature, and the supernatural. Some were also dazzling and charismatic performers in their own right, presaging today’s rockstars.

Next time on Exploring Classical Music: The Romantic Era, Part 2 we’ll meet the ultimate Romantic celeb, and hear heartbreakingly gorgeous and virtuosic music inspired by nature. Until then, cozy up to the fireplace with some popcorn, a friend, and a Romantic-era playlist.