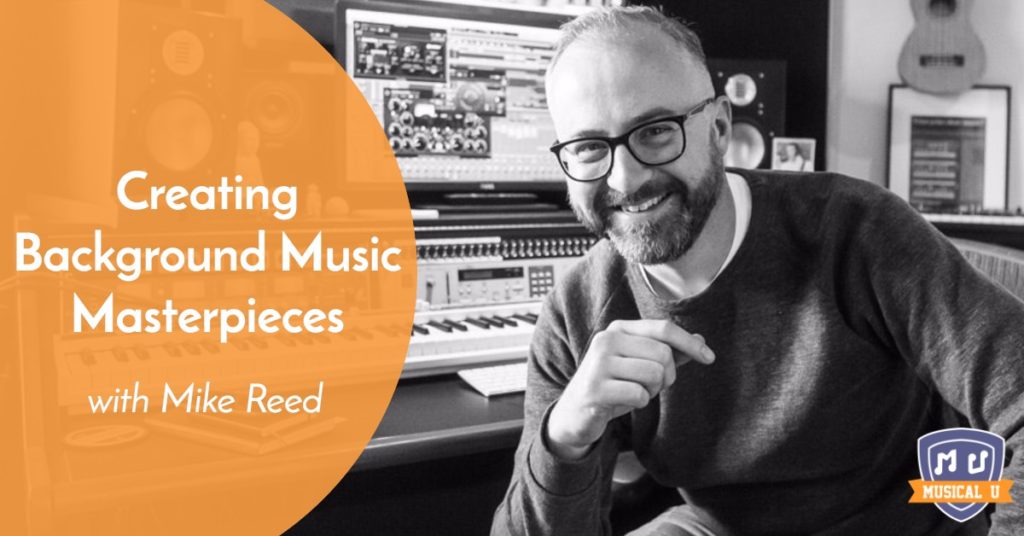 When people think of the work opportunities that the music world offers, the first job descriptions that come to mind are typically gigs like musician, record producer, and radio DJ. But, as we’ll learn from composer Mike Reed, the music industry has its fair share of “hidden” jobs…

There are musical artists who you won’t see on stage, and whose names you won’t always find printed on the back of your favourite 12-inch vinyl. They make music that does not simply stand alone; instead, it blends with another art form – so seamlessly that you don’t always notice it. Musical U had the opportunity to chat with drummer-turned-background music composer Mike Reed, who wears the hats of writer, producer, arranger, and multi-instrumentalist in his eclectic compositional work to create a diverse array of material spanning genres from classical music to synthpop. His compositions get put to good use in everything from minute-long commercials to blockbuster films – among which are The Legend of Tarzan, Cuban Fury, and Best Exotic Marigold Hotel.

Here, he shares his compositional techniques, discusses what an ordinary day on the job looks like, and compares the solitary and the collaborative aspects of his work.

Q: Let’s start at the beginning: how did you get into music?

I was brought up in the Salvation Army Band, playing cornet from age 5 or 6. I then progressed to trumpet, and started playing in the Devon County Youth Orchestra. In the meantime, I had some music theory and piano lessons and then went on to take up drumming lessons at school as a teenager. At the same time, I was experimenting with writing programs to control a Casio keyboard from my ZX Spectrum computer (this was in the late 80s and early 90s), and also taping songs from the radio to try and work them out by ear.

Q: What inspired you to become a drummer? What was your drumming career like?

Drums always seemed cooler than the trumpet! I had some drum lessons while at school, and then went on to study with the legendary drum teacher Bob Armstrong after I’d finished university. Bob sadly passed away earlier this year, but he was one of the most inspiring people I’ve ever met – musically and personally.

I can’t pretend that I was the most successful drummer ever, but I was lucky enough to do some recording with The Prodigy amongst a few other big names, and play on a number of film soundtracks for the composer Michael Price (who is now very well known for his work on Sherlock). I still play for various projects, but my session drummer days are behind me.

Q: How did you become a background music composer?

Concurrently with drumming, I was pitching on some TV advertisements in the USA through a friend who was with a music advertising company over there. As that progressed, I began to enjoy it more than drumming on other people’s music, and started to look for opportunities to do more.

”I like to build upwards from rhythm which hopefully means I have at least the potential for a different sound.”

Unfortunately, with adverts, there are usually many other composers pitching, so you often don’t “win” the job.

Library music, while not quite as instantly lucrative as a big advert, is reasonably stable and less plagued by various creative types up the advert music chain sending feedback like “It needs to sound more green”, or “Can you make it sound soft and hard at the same time?”.

I started co-writing with a few other composer friends who were already doing library music, and gradually found my way in from there.

Q: How did you learn all the other instruments that you play in your compositions?

Trial and error! I really enjoy the sounds that come out when someone who is musical picks up a new instrument and approaches it in an untrained way – not that it always works! I muddle through on guitar and bass with lots of editing, and my classical background means I have at least an inkling of how orchestration works, so that helps for programming string sections and the like.

Q: How did you learn your composition techniques? And for most of your work you are the producer as well – what was your learning process there?

I was very lucky at university to have Sebastian Forbes as my orchestration and composition professor – I wish I had taken more advantage of his genius while I was there. I also learnt a lot from playing on other people’s music – both as a drummer at university on other students’ projects, and later professionally.

Generally though, I think I’ve learnt most from just listening – soaking up as much music in as many different styles as possible. My learning process with production has been similar. Many of my university friends have ended up as recording engineers and I’ve learnt a lot from them about production, mixing and equipment. I do lots of listening and experimenting – often failing, but I always get there eventually!

Q: So many who aspire to a musical career have a fairly limited view – either education or performance. The work you do is one of those “hidden” careers. Can you tell our readers more about your job and how it works?

Basically, the bulk of my work is writing and producing music to a brief – that could be anything from massive bombastic orchestral epics to tiny evolving synth drone soundscapes.

I write, produce, and mix it to be delivered to a music library company.

Q: What is a music library? How is your music used?

A music library is a bank of pre-written music that is ready to use on productions – TV programs, adverts, films, and so on. If a filmmaker wants, for example, a tense string quartet piece, they can search through these libraries catalogues and hopefully find a few options. Then they pay a fee to the company to use the track.

Q: What does your day look like? Since you’re putting out a large quantity of music without really knowing where it’s going to wind up, how do you decide what to write on any given day?

Generally, I have a bunch of briefs in different styles from library music companies in at any one time. Unless I’m working on something to a tight deadline I generally just see how I feel in the morning after doing the school run, and start coming up with ideas for whichever of the briefs I feel like.

I generally come up with more ideas than I need for a project and then whittle them down to my favourites. I often leave things and come back to them to get a bit of distance. Then it’s a process of “working up” the ideas – fleshing them out, working on sounds, and eventually mixing.

Often there are revisions to do on tracks I’ve submitted, and sometimes I come up with ideas for briefs myself or put some tracks together to pitch to a company. I also ghostwrite a lot for other (more well known!) composers in TV and film, and that’s generally more deadline-based and takes initial priority on many days. Q: How do you balance the business and creative sides of your work?

It’s a struggle, to be honest. I’m not great at meetings or maintaining contacts, but I seem to have managed so far! I have an accountant and he’s set me up with an online accounts system which means I no longer have to think much about that side of things. Anything business-related, I try to keep to defined blocks of time rather than bits and bobs when I’m trying to be creative.

Q: Do you do everything yourself? Or do you bring in other musicians?

I do 90% of things myself, although I love to bring in other musicians when budget allows. The most common thing is to bring in various singers on projects, but occasionally guitarists and other musicians too when something that I can’t play well enough needs doing. Obviously, it’s great when budgets can stretch to a full real orchestra, but those are few and far between!

Q: Wishful thinking! I’m enjoying the tremendous variety of tracks on your website. Yet with all that variety, I hear a common thread throughout of very strong and defined rhythmic energy. How do you think your drumming experience gives you an edge as a successful composer?

I think it helps with my “voice”. I enjoy rhythm and much prefer writing rhythmic things to long lyrical melodies, so it’s nice to be told that comes across!

Drums and rhythm are alien to many composers, and it’s not unknown for some to outsource their drum programming and percussion writing, but I like to build upwards from rhythm which hopefully means I have at least the potential for a different sound.

Q: What advice would you have for others considering a career in composing?

Contacts and friends are a big part of this business, so develop and nurture those as much as possible. Most importantly though – listen, experiment, fail, try again, learn from everyone and everything, and don’t stop learning or being inquisitive about music (or life in general)!

This inquisitiveness that Mike discussed is your best friend in the world of music-making; never stop experimenting, learning, and evolving. You’ll end up with a rich discography and plenty of lessons learnt! Mike Reed is an eclectic and prolific composer, drummer and producer. Based in rural Devon in the UK, his work can be heard on countless TV programmes, films and commercials all over the world, including movies such as Best Exotic Marigold Hotel, Cuban Fury, The Legend of Tarzan, major UK and US TV series, and tracks by bands as diverse as The Prodigy and David Gray.