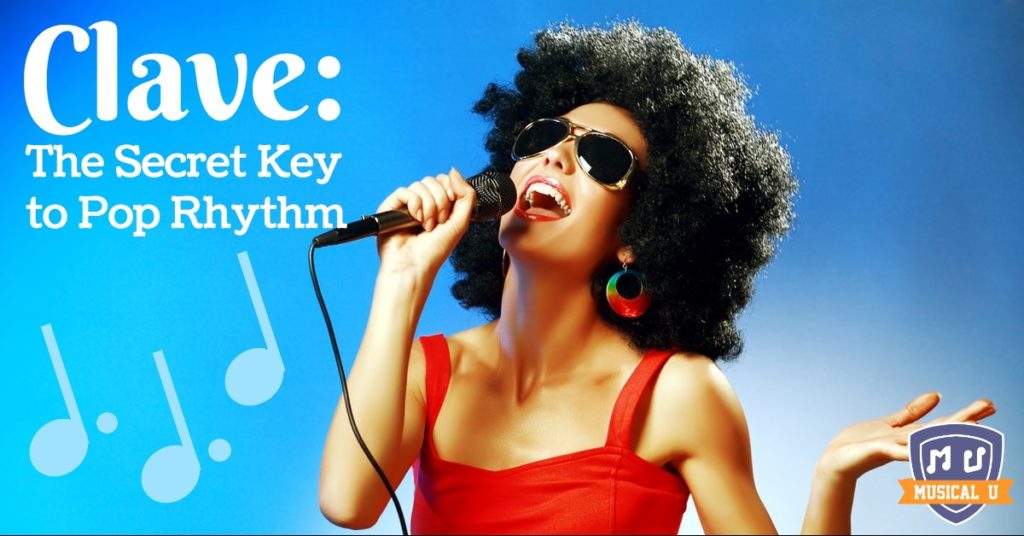 When you hear the word “clave”, what do you think of?

The two most likely answers are either “Nothing – I have never heard of it!”, or “Why would I want to learn clave? I’m not planning on playing Samba music anytime soon…”

Though you can be pardoned for both of these because of how little clave is discussed in-depth in music literature and theory, the truth is that clave exerts its influence on rock, dance music, and most interestingly, as far as the radio-friendly pop music of today.

The word “clave” is Spanish for “key” – and clave rhythms are the rhythmic “keys” around which all the other rhythmic activity intersects and interacts.

Though clave rhythm originated in Afro-Cuban music and is most clearly heard there, if we dig a little deeper, we see that an astounding amount of contemporary pop music has adopted the clave for its own purpose.

So let’s dive in. We’re about to see how clave originated, changed through the years, and was adopted by more and more styles of music – making its way from Afro-Cuban music to pop, rock, hip-hop, rap, and beyond.

For our first example, let’s take a listen to one of the most-played songs of the decade:

Adele’s ballad “Hello” contains a rhythmic piano accompaniment that beautifully utilizes the simple 123-123-12 clave pattern. This is best heard at [2:22], at the start of the first chorus, as “Hello from the other side…” is sung.

This pattern splits the music into pulses of varying lengths – so though the music is written in 4/4, by splitting it into a 123-123-12 pattern (that we count in eight eighth notes) we create a less “square” rhythm while still sticking to a time signature that has four beats.

In the case of “Hello”, this creates a swaying, lilting rhythmic structure perfect for a nostalgic ballad.

Now that we’ve heard a clave rhythm in action, let’s look at its concrete rhythmic definition.

So What Is Clave?

Clave actually refers to two things – an instrument and a style of music that are closely related.

“Claves” is the name given to a percussion instrument traditionally used in Afro-Cuban music, consisting of two cylindrical sticks made of hardwood. They are struck together by the player to produce a bright percussive sound – a sound that forms the backbone of much Caribbean music, a center around which the other instruments and the dancers orient themselves.

The tone of the instrument plays a very special role – it’s capable of not only holding its own in a big band arrangement, but also cutting through everything in order to be heard clearly, a quality that makes it the perfect centerpiece for rhythmic organization. Worship Musician discusses the sound of the clave in greater detail, explaining the traditional tone of the instrument.

The rhythms played on these wooden sticks are also referred to as “clave” – and though Caribbean music is incredibly diverse, the same underlying rhythms can be heard in much of the music. There are two in particular that are the most ubiquitously heard.

A Tale of Two Claves

One common type of clave rhythm is known as the son clave, which is found in two flavours, 3-2 and 2-3. Let’s look at each one:

Yes, that’s right – you’ve already heard the 3-2 son clave above! It has that trademark “bam ba-dam bam – bam bam” groove. This is is the type of clave that pop music has borrowed for its purposes, as we’re about to see even more examples of.

Rearrange this slightly and you get the also popular 2-3 son clave:

The name “son clave” is derived from the Cuban son, a genre of music and dance that became an integral part of post-war Cuban identity. LumBeat gives an excellent history lesson on the son, its significance, its instrumentals and band arrangement, and the rhythms found within. They’ve even created an Afro Latin Drum Machine – an app with over 100 pre-programmed rhythms and the perfect tool to jam along to!

The other oft-heard variant is the rumba clave. This is the signature pattern of Cuban rumba. Similarly to son clave, it has five rhythmic “strokes”, and its rhythmic pattern gives a unique, characteristic groove to the music. Listen to the 3-2 rumba clave:

As you can see from the score above, it differs from the son clave by only one note. That third hit in the first bar is a bit delayed. This seemingly minor difference lends a completely different sound to the rumba clave – it has more of a rolling feel than son clave:

For further visual aid to compare and contrast these rhythms, Rueda Con Ritmo provides a useful beat grid comparison of these four common clave patterns. For those that internalize rhythms best by counting along, Marc de Douvan shows you how to count clave rhythms by using measures and by numbering the hits. Figure out which counting method works best for you, and practice playing along with Dance Papi’s son and rumba clave beats video.

These clave patterns can be altered in various ways to yield different grooves, as YouTuber 12tone demonstrates in an illustrated guide to “the world’s most popular rhythm”.

Before we dive into examples of where these highly danceable patterns are found in the music we enjoy today, let’s backtrack and see where clave came from and how it made its way from traditional Afro-Cuban music to the airwaves of mainstream radio.

The Creation of Clave

If you’re a music history buff, it’s likely that you know the origin tale of Blues music – the slave trade brought the rhythmic traditions of Africa over to North America, where they mingled with European musical traditions to produce the soulful, expressive style that paved the way for modern rock ‘n’ roll.

However, the United States were not the only destination for the transatlantic slave trade. More than a million African slaves were brought to Cuba to work on sugar cane plantations.

According to many historians, the instrument known as “claves” were born when the African people began using hardwood pegs that were used to hold ships together as percussive instruments, playing on them the rhythms of sub-Saharan musical traditions.

It is believed that these rhythmic elements intermingled with Cuban music in the early styles of music that used clave rhythm. Among the first was the slow, syncopated danzón, which did double-duty as a musical style and a dance, and the contradanza (also known as the habanera). Rumba, son cubano, conga, and timba soon emerged, with the same clave rhythms as their backbone.

Cuban music and instrumentation goes far beyond just clave, with a multitude of percussive elements that contribute to its jubilant groove. Liberty Park Music takes a closer look at the cultural roots of Afro-Cuban music, the instrumentation involved, and the central role that clave plays in this tradition.

Clave is still an enormous part of Cuban culture today, as Juan Alexander Padron details on Havana Music, recounting how he heard the Cuban clave everywhere on the TV and radio as a mere infant.

It wasn’t long before African-American music began incorporating these Afro-Cuban rhythmic elements. Much of it was based on the rhythms of the contradanza, whose trademark rhythm was one of the greatest influences on Rhythm and Blues.

In fact, it was from contradanza that the New Orleans clave was obtained – a pattern that consists of the half the clave pattern, with a backbeat added in:

The presence of these clave rhythms only increased in subsequent years, as Cuban music was adopted more and more into the American mainstream.

Notably, Rhythm and Blues musician Bo Diddley popularized what is essentially a 3-2 son clave rhythm with his self-titled debut single:

As Rock ‘n’ Roll emerged out of Rhythm and Blues, it retained clave as an important rhythmic element. Simple, five-accent rhythms are very common in early Rock ‘n’ Roll, with musicians like Fats Domino, Buddy Holly, Billy Boy Arnold, and Elvis making use of clave rhythms. The son clave pattern was a rock ‘n’ roll favourite, because of how well it fit in with the 4/4 key signature sensibilities of the genre.

Contemporary pop music is hard to concretely define yet instantly recognizable for its diverse array of influences – and because it borrows from rock music, Latin music, and R&B, it should come as no surprise that clave has remained as a strong rhythmic influence in modern pop.

And interestingly, as we’re about to see, not only has pop embraced the clave, but it has even tweaked it to create the “pop clave”, a simplied rhythm that forms the backbone of countless radio hits.

Pop music has essentially taken this rhythm’s first bar, looped it, and used it as the rhythmic basis for countless catchy and highly-danceable anthems.

Here is our “pop clave”:

By omitting that second bar of the son clave, the pop clave is imbued with a restless, constant forward motion that keeps listeners engaged. It invigorates even slower, relaxed ballads with momentum. Listen for it in Lana Del Rey’s “Love”:

The pop clave is an interesting beast – once you hear it once or twice, you’ll start to hear it everywhere. And it won’t be your ears playing tricks on you – everyone from Rihanna and Madonna to Led Zeppelin and Journey makes use of it. Just listen for that characteristic 123-123-12!

Pop music often pays even more obvious homage to its roots by using the full son clave rhythm rather than only its first bar. When that second bar of the clave rhythm is retained, it gives the music a cyclical, rounded feeling.

Notice how this “full clave” rhythm differs from the pop clave. The two-bar variant has a question-and-answer, tension-and-resolution format. Bar one sets up the groove, and bar two completes it. Bar one creates tension, and bar two resolves it with two strong, consecutive hits.

Popular hip-hop and rap music could scarcely exist without this clave pattern. Its long and short pulses make it the perfect framework over which to layer intricate beats and vocals. Snoop Dogg’s “Drop It Like It’s Hot” is one of the most in-your-face and infectious examples of the clave in hip hop:

A mindblowing aspect of music is how rhythmic motifs can be traced from genre to genre, with styles embracing the rhythmic sensibilities of the styles that spawned them, integrating the existing musical tradition with fresh new sounds to create something new yet familiar.

The wonderful thing about clave is that it most likely already “exists in the wild” in the style of music you love to play. Whether you’re a rock aficionado, pop diva, Latin music enthusiast, or jazz cat – you can enjoy integrating this rhythmic treasure into your practice, improvisation, and songwriting!

For a fun challenge, try playing your favourite 4/4 song “en clave”, altering its rhythm to fit that 123-123-12 pop clave feel. The results may sound strange, or plain silly – but more likely will open your ears to a brand new, groovy way of playing that tune!