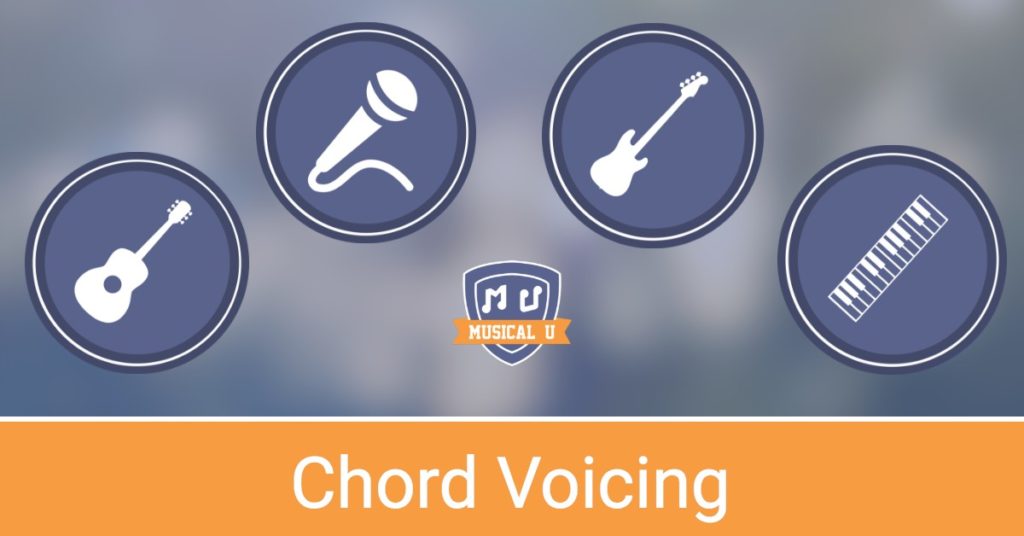 Many times when we first learn chords on guitar or keyboard, we learn and memorize one basic hand shape for each chord. And we can go far with that. However, experimenting with playing the chord tones in different arrangements – called “chord voicing” – opens up a whole new world of sonic possibilities.

These voicings aren’t limited to traditionally chording instruments like guitar or piano – you can even learn cool chord shapes for your bass.

Let’s take, for example, a C major chord. The three notes that spell that chord are C, E, and G. Now here’s the magic: no matter what order or where you play those notes on your fretboard or keyboard, if you’re playing those same three notes it’s still a C chord!

There are endless possibilities and combinations that you can devise – even for just three little notes.

So what are these different chord voicings good for?

When you learn to play chord voicings, you’ll also gain more mastery over your keyboard or fretboard.

In this month’s Instrument Packs, you’ll see how each of Musical U’s Resident Pros approaches the topic of chord voicing, and how you can explore the possibilities on your instrument.

Spanning 88 pitches, the piano presents a huge canvas for painting chord voicing effects. But it all starts with getting the special close voicings known as “inversions” under your fingers. Resident Pro for piano, Sara Campbell, makes inversion exercises fun, beautiful, and musical, and then expands on them with lovely two-handed voicings leading to a surprisingly sophisticated harmonization of a very familiar little tune:

With ten fingers and 88 keys, piano chord voicing can be very lush and satisfying without being all that difficult. Sara will guide you as you delve into the possibilities.

Resident Pro Dylan Welsh confesses that he is a chord voicing nerd. Dylan first shows you how the principle of chord voicing works and provides practical exercises. A very actively gigging professional, Dylan has heaps of wisdom to share on how to deploy chord voicing in a band context:

With Dylan’s chord voicing guidance, you’ll open your mind and fingers to a world of chordal bliss.

Typically, bass players tend to play one note at a time. But Resident Bass Pro Steve Lawson‘ demonstrates that with a few simple chord shapes, you can expand your harmonic expression whether playing alone or with a group. Plus, learning chords on the bass deepens your harmonic understanding of the fretboard when you do go back to single notes:

Watch, learn and practice as Steve demonstrates how to expand your bass playing into the chord zone.

Coming Up Next Month…

Ever hear a recording of yourself and thought, “That’s not quite what it sounded like in my head…” You may have been feeling it, but somehow something gets lost in the translation when you put it all on your instrument.

Play it with feeling! Each of our resident pros will show you how to take the music inside you and translate that emotion into moving performances on your instrument. Yes, there are specific instrumental techniques that will help you to access the expressiveness you have always desired in your playing.