Home » Interviews » Blues, Celtic Music, and a Passion for Instruments, with Dave Bainbridge

Blues, Celtic Music, and a Passion for Instruments, with Dave Bainbridge 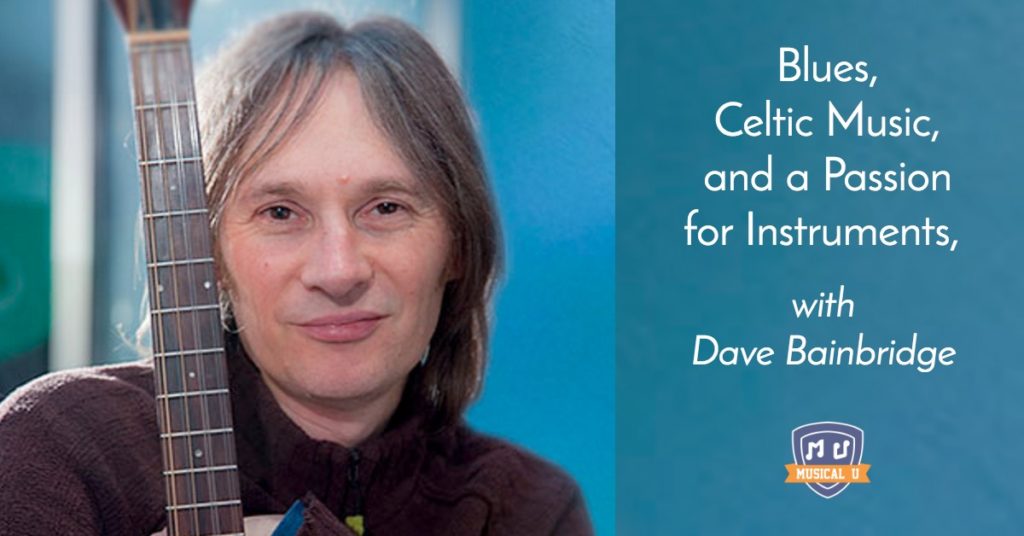 Born into a musical family in the northeast of England, Dave Bainbridge has woven his musical life into a rich and expansive tapestry of styles, genres, instruments, and projects. While he is best known for the pioneering UK-based Celtic folk/rock/ambient band Iona, which he co-founded in 1989 with David Fitzgerald, Dave also spent decades playing in soul and blues bands – in addition to a host of other musical endeavors.

We first talked with Dave about his musical beginnings, his love for both the blues and Celtic music, and the joys of being a multi-instrumentalist:

Q: Greetings, Dave and welcome to Musical U. You’ve had such an amazing musical life so far! How did it all start?

I was very fortunate to grow up in quite a musical environment. My parents and my sister (and various aunts and uncles) were all musicians. I started classical piano lessons at the age of 8.

My sister Maureen, who was 8 years older than me, was a blues and rock singer and keyboardist. So as well as the classical piano lessons, I spent a lot of time listening to her record collection – which included albums by The Beatles, Jimi Hendrix, Vanilla Fudge and several blues albums by various US and UK artists:

At this young age I was a bit like a sponge – absorbing all these musical influences.

Q: Those who know you for your atmospheric prog rock/Celtic fusion music may be surprised to find out that you paid a lot of dues playing blues. How did you first start playing the blues?

When I started buying records myself, a lot of the early bands and artists I loved – like Led Zeppelin, Deep Purple, Free, Cream, Ten Years After and Eric Clapton – came out of the British blues boom of the late 1960’s (though I didn’t know it at the time). What attracted me to this music was the raw passion in the playing and singing.

So from a very early age, thanks to my sister, I was aware of blues music. At first, I didn’t know anything about the history of the genre. But my dad, who was a guitarist, would make up tapes for me of some of the really early blues and jazz guitarists, like Eddie Lang and Lonnie Johnson, so gradually I learned more about its origins:

Q: Well, Dave, you certainly took that ball and ran with it. What was your “coming of age” in the blues?

In 1985 blues singer/guitarist Norman Beaker (recently inducted into the Blues Hall of Fame), who had heard me playing with a soul band, asked me to join his blues band, which I played keys with for the next 10 years, in between doing lots of other things.

This was a wonderful time as we were often the house band for visiting US bluesmen, both live and for numerous radio broadcasts and some album recordings. So I was learning at the coalface playing with many blues legends – some of whom are sadly no longer with us – such as Lowell Fulson, the great Jack Bruce, Carey Bell, Louisana Red, Fenton Robinson, Phil Guy – and some who are happily still around, such as the amazing Buddy Guy, Paul Jones, and Lurrie Bell:

Q: How did this blues period grow your musicianship, and how does it inform your music today?

Though blues music is historically African-American in origin, I think anyone can relate to it, because it tells the story of what it means to be human – to experience pain, suffering, injustice, loss, as well as joy, happiness, peace and passion.

I’ve played with many blues artists who wouldn’t have a clue how to write a note of music down, but who only have to play or sing one note for it to touch your heart and soul.

It’s the same with soul music, that connection with something elemental within us. I was also fortunate enough in the ’80’s to play with many visiting US Motown artists on gigs in the UK and experience firsthand how much this music can move people.

The fluidity in phrasing is something I’ve always loved in both blues and soul, that ability to play or sing just behind or in front of the beat or to bend a note up or down so that, in reaching towards a certain pitch, the spaces in between somehow release emotions that awaken something deep within us:

I also love black Gospel choir music because, for me at least, it so easily connects the earthly with the spiritual, with something both deep inside and utterly outside of us. For me, this is the “magic” of not only great music, but great art of any type. It’s certainly my goal – even obligation – as a musician, composer and producer to attempt to capture those moments that connect listeners to an awareness of a greater reality.

Q: Terrific, Dave. I’m fascinated by how you find universality in what may be seen as culture-specific musical expressions. Your more recent work with Iona and others has been imbued with Celtic sounds. What are the qualities of Celtic music that have attracted you?

There is something about the music and stories that are rooted in the Celtic countries such as Ireland, Scotland and Wales that – like blues, soul and Gospel – creates deep connections with people. The sense of tapping into an ancient well, on the cusp of memory, to a very different time is incredibly strong.

Carrying on hundreds of years of tradition; generations bound together by strands of melody or verse; these are powerful things and are much more than nostalgia or sentimentality:

This is folk music, the music of the people, the “folk” – blues, soul, and Gospel are also folk music in that sense. Folk music is born out of communities, people’s everyday stories, their relationship with the natural world.

I love the sound of the simple, acoustic instruments. It’s still a wonder that a wooden box with some strings attached to it can produce sounds that can move me. It’s easy to forget that the wood a guitar or a violin is made out of grew out of soil and was once part of a living tree.

In our technological, virtual world, this music reminds us of the threads that connect us to the natural world around us and to our forefathers – it grounds us.

That’s beautiful, Dave! And speaking of all those wooden boxes, what was your process of becoming a multi-instrumentalist? What are the advantages to playing different instruments?

After getting into rock music I really wanted to play the guitar because I loved how you could bend notes and play loud, so my dad (a guitar teacher earlier in his life) taught me the basics.

Much later on I wanted to expand my sonic arsenal, so I also started playing bouzouki, mandolin, bass and percussion. I especially love the bouzouki and play it on most of my recordings, either in a rhythmic or melodic role.

When I was at music college, it was compulsory to spend a full term on learning an instrument from each musical family, so I tried euphonium, double bass, and clarinet. I also have a few tin whistles that I occasionally dabble on, but not very well. Whether or not I become proficient, it’s very useful as a composer and arranger to know the basic mechanics of the instruments that you’re writing for.

Q: What is your advice to musicians about learning a new instrument?

I used to teach piano and guitar and occasionally found that a new pupil would be having difficulties playing the instrument purely for physical reasons, and that they’d find this very frustrating. Sometimes it can take a while to find the instrument that really suits you, your personality and your body.

I have a friend who’s a great guitarist, who recently took up the tin whistle and low whistle, and he’s an absolute natural on these instruments, playing complex jigs and reels within months of him starting. It’s really opened up a whole new vista for him in terms of the direction of his music.

So it’s always worth trying different instruments to see where your aptitude lies. And there are certainly no rules on whether you should stick to one instrument or play many – check out Rachel Flowers, who seems to be a virtuoso on every instrument she picks up!

Thank you, Dave. She’s a wonder! And it was wonderful to hear your perspective on the inner connection we make with folk music – be it blues, Celtic, etc. – and our beloved musical instruments. I look forward to hearing more about how you put those concepts together to create such astoundingly beautiful music.

As we grow and live within a global community, folk traditions that once were isolated to their own culture become available to us, and a means to express the musical and personal parts of our own beings. Similarly, when we branch out to different instruments we may even find a connection to a world that we didn’t know was there before.

While taking on a whole new instrument and/or musical tradition may seem overwhelming, Dave Bainbridge’s extraordinary and varied career is case-in-point that venturing into new realms is a worthwhile and rewarding pursuit. You can receive more inspiration from Dave on his website, and learn where to see him in person on his Facebook page.

And while you’re waiting for more Dave Bainbridge here on Musical U, take a moment to imagine your next instrument…