Home » How To » Arranging » Before and After: Covering Father John Misty

Before and After: Covering Father John Misty 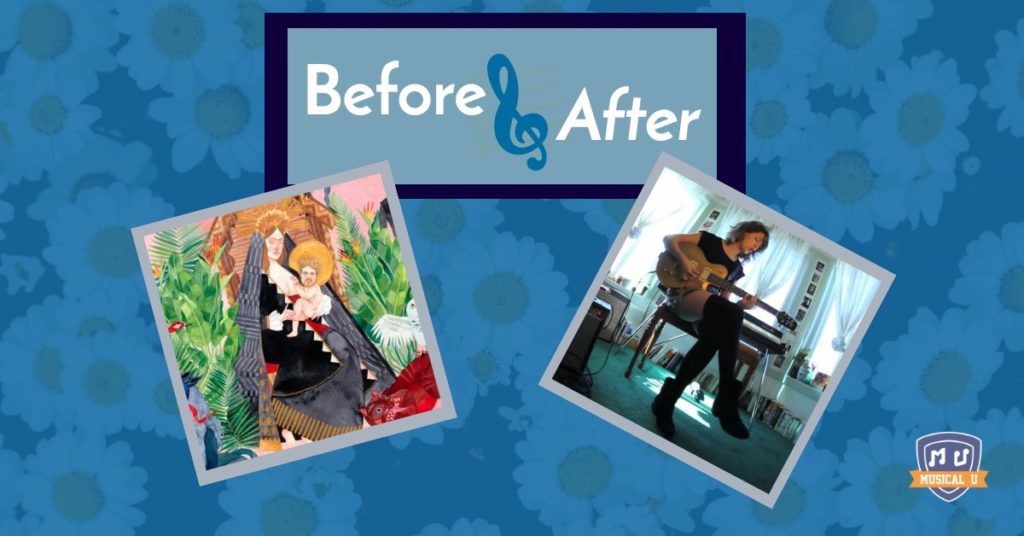 As you probably know, the art of writing songs goes back to just a person singing while playing the guitar or the piano, maybe even just clapping or stomping their feet. So it should be no surprise that one of the most common ways of covering a song is just playing the chords on guitar and adapting it to one’s own voice.

The following example does precisely that. Although the original version of “When You’re Smiling and Astride Me” by Father John Misty is oozing with arrangements and colossal production, Kendra McKinley has managed to strip it down to its bare elements and craft a version of her own.

Considering that the original song is part of an album devoted to exploring the male psyche during monogamous relationships, this was quite an achievement. Let’s take a look at how this San Francisco-based singer-songwriter managed to bring this song into a female perspective with just a guitar, her vocal cords, and some creativity.

Let’s take a look at the original… beautiful orchestration, arrestingly honest lyrics, and all.

In case you don’t know him, Father John Misty is an American singer-songwriter whose style may be most easily classified as folk rock. He is also well known for recent headline-sparking shenanigans like covering an entire Taylor Swift album in the style of Lou Reed, or ranting about American politics and culture instead of playing his programmed set at a festival in Philadelphia.

But anyway, back to our comparison! As a songwriter, Misty usually composes with just a guitar and his voice while writing lyrics – sometimes, as he often puts it, while drunk in his bed at 4 A.M. Therefore, all arrangements are added afterward, and the song’s essence (chords and lyrics) usually remains the same.

When You’re Smiling And Astride Me (Studio Version)

In the version on Father John Misty’s 2015’s record “I Love You, Honeybear”, this song is just swarming with multifarious musical elements:

The bedrock of the song in terms of harmony is carried by the piano’s chords and the bass that marks each root note. The guitar, as opposed to how the original demo might’ve been, is doing licks here and there. There are also strings, a synth that sounds like a violin, an organ, and a female choir which presents the song’s main motif.

Once the verse kicks in, you may notice that everything compresses in order for Misty’s singing to take center stage. His style of singing is of course very masculine – but in a pleading sort of way. Like a self-conscious person clinging to remain with the one he loves.

As the song moves forward, the arrangements keep getting bigger, and Misty’s singing grows more affected. This is precisely what makes it work. You may have noticed that it doesn’t have a standard song structure: it consists of only two short verses and the “whoa oh oh oooh” motif that performs triple duty as an intro, a sort of a chorus, and an outro.

Now let’s look at how a stripped down version of the song can have as much impact when delivered with raw emotion:

With just a guitar in her hands, Kendra McKinley has to handle the harmonic foundation, rhythmic feel, and subtle arrangements. Pay attention to the rhythm she strokes in ghost notes with her right hand before starting the song. This eventually leads to the same cadence as in the original, a 4/4 time signature with the accent on every third beat.

Once she starts with the song’s main motif, this cadence is more evident. Kendra down-strikes the high strings with more emphasis every third beat and keeps the rest of the strokes leaning more towards the lower notes.

It’s very important to keep a steady rhythm to sing over. Otherwise, everything falls apart. This may seem obvious, but you’d be surprised how many covers fail at this. A lot of people just focus more on the vocals than on what the strumming hand is doing, but that hand provides the foundation! While it’s easier and more obvious to focus on singing, it’s hard for things to sound good without some sort of an underlying beat.

If you pay close attention, you may be able to tell that Kendra is singing in a different register than Father John Misty on the original. Most likely to better fit her vocal range, she transposed the song’s key from Em to Bm. Other than that, she follows the same chord structure and intervals, adding little licks here and there as subtle playful details.

The main thing to point out is how Kendra has managed to make the song her own, not only in terms of key but also on delivery. She was able to transform the style of the melody by singing more with the back of her throat, and by not shouting as much as Father John Misty.

The result is perhaps more restrained than the original, but therefore more elegant and graceful. Even when she extends some of the notes and plays with the melody, it works very well with her jazzy style of guitar playing. It’s not trying to match the original – instead, Kendra is bringing it into her own musical territory.

Overall it sounds more smooth, soothing, and heartfelt. It just seems to work perfectly with the room she’s singing in, doesn’t it?

As Kendra McKinley’s cover of “When You’re Smiling And Astride Me” illustrates, it doesn’t matter how intricate or “produced” a song is. With enough creativity, it can be re-purposed to just the vocal line and an accompanying instrument. It doesn’t always have to be an acoustic guitar. You might try an electric guitar with a processed signal, or even a ukulele, piano, synth, bass, or even drums.

The beautiful thing about covers is that they don’t necessarily require much equipment or planning. Have a tune in mind that you’d like to cover? Just figure out the original chords, find the lyrics, and search for a way of reshaping it to fit your own style and ambience.