Home » How To » Arranging » Before and After: Covering “All About That Bass”

Before and After: Covering “All About That Bass” 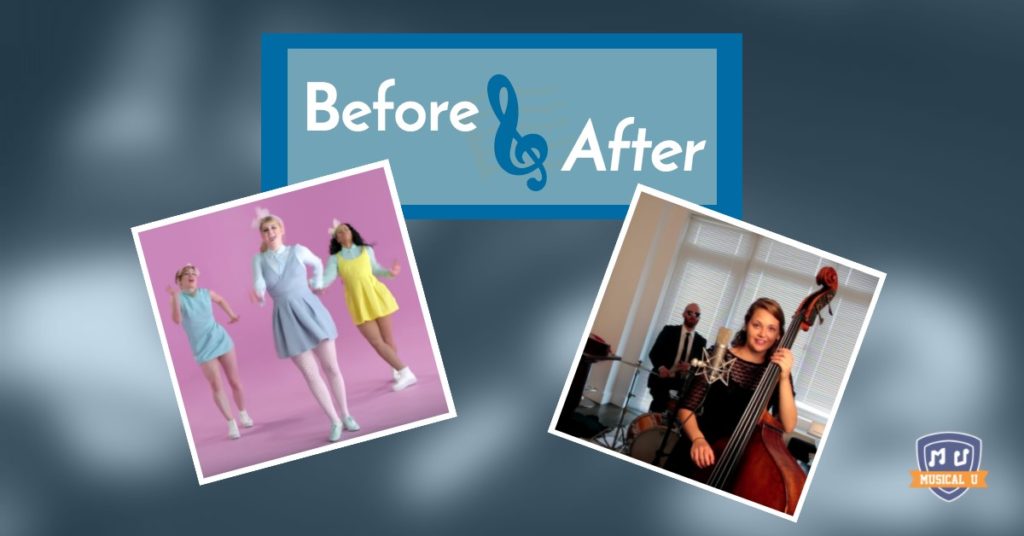 An unfortunate side effect of being a professional musician is the occasional bout of music aversion. Spending so much time practicing, memorizing, analyzing, and performing can leave you wanting nothing but silence…

For me, when this strikes, I have two options. I can turn off every noise-making anything and curl up in my imaginary sound-proof bunker – or I can turn on Radio Dismuke, an online radio station that plays only vintage recordings from the 1920s and 1930s.

When I can listen to nothing else, I can listen to Radio Dismuke, and I have no idea why. Something about those thin, tinny recordings, that obscure American accent that only exists in old black and white movies, and that big band sound rehabilitates all the worn out corners of my brain.

The Original: All About That Bass by Meghan Trainor

Meghan Trainor and I share a love of retro music. While my era is the early 1900s, Trainor’s is the ‘50s and ‘60s. These decades gave birth to rock and roll, and the likes of Elvis, Buddy Holly, and Little Richard. Alongside rock and roll was doo-wop, R&B, and good ol’ swing.

Elements of all these styles are present in Trainor’s “All About That Bass”. Written with Kevin Kadish in 2013, and released in 2014 on her debut EP, Title, the song is classified as bubblegum pop. While this genre is aimed at teens and pre-teens, “All About That Bass” has an infectious charm that has extended its reach far beyond its target audience.

“All About That Bass” has two repeated sections, which together form a kind of two-part chorus. Chorus A occurs right off the top and repeats one line of lyrics: “Because you know I’m all about that bass, ‘Bout that bass, no treble…” Chorus B [0:45] doesn’t occur until after the first verse, coming in with the lyrics, “Yeah, my momma she told me don’t worry about your size…”

Naturally, upright bass is a feature in this song, coming in with the first Chorus A section. It continues throughout, providing a solid foundation for the vintage elements included in the song, such as the doo-wop backing vocals in the choruses.

The Cover: All About That Bass by Postmodern Jukebox, featuring Kate Davis

Postmodern Jukebox’ tagline is “We take pop music back in time.”  If you’ve yet to discover Postmodern Jukebox, I suggest you clear out your weekend and make a date with Youtube. If you’ve heard it on the radio, they’ve probably covered it. How much more fitting could it be to take an already vintage-inspired song like “All About That Bass” and take it even further back in time?

The Postmodern Jukebox cover of All About That Bass appears on the collective’s 2014 album Historical Misappropriation and features the New York-based, Portland-raised multi-instrumentalist, Kate Davis, on upright bass.

The cover adheres to almost the same form as the original, but adds more jazz elements. Slowing the tempo from the original’s 134 to 123 BPM, this version has a more laid-back swing groove. To keep things from dragging, they introduce a couple of double-time sections. One of these sections provides the accompaniment for a 16-bar bass solo.

For the first Chorus A, Davis enters with vocals, playing the bass line from Trainor’s original. Bradlee and Tedeschi snap their fingers in the background to keep tempo.

Piano and drums enter at Verse One [0:16]. Bradlee starts out with very basic fills on the piano, keeping things simple to avoid getting in the way of Davis’ vocals and bass line. Tedeschi puts the emphasis on the second and fourth beats, helping the song achieve its laid-back swing groove.

Bradlee and Tedeschi continue Verse Two [0:33] as in verse one, but drop out for the lyrics, “‘Cause every inch of you is perfect from the bottom to the top,” leaving Davis to accompany her own vocal melody line in unison on the bass.

Piano and drums come back in on Chorus B [0:48] with more volume and energy.

The piano and drums step back for the second Chorus A [1:19], allowing Davis’ vocals and bass lines to come through. Tedeschi switches the rhythm here, now emphasizing the first and third beats on the rim of the snare drum.

Bradlee and Tedeschi drop out at the bridge [1:35] for Davis’ big vocal moment, re-entering with the energy of Chorus B. Tedeschi returns to emphasizing beats two and four on the snare drum. At the end of this section, right before the next statement of Chorus B, the group offers a glimpse of things to come with two bars of double-time.

Tedeschi’s snare hits continue to gain energy through this Chorus B [1:51] as Bradlee adds more piano fills under the vocal line.

All About that Bass Solo

The group switches to a double-time feel for the bass solo [2:22]. For the first half of the solo section, Tedeschi accompanies Davis’ solo with a light, galloping pattern, while Bradlee simplifies his piano accompaniment. He jumps to the high register to provide contrast to Davis’ bass solo.

Quite a lot of care has to be taken by any ensemble when the bass has a solo because its low register can make it hard to hear. Instruments capable of occupying higher registers like trumpets and saxophones can cut through thick accompaniment, but the same is not true for low register instruments. Their tones simply get lost in the mix. Bradlee’s chooses to thin out his accompaniment and play quietly in the upper register to accommodate the bass’s low tones. For the second half of the solo section, Bradlee and Tedeschi play shots, leaving empty space for Davis to fill. This is common in jazz for solo sections, particularly when the solo is in the bass or drums. At the end of this section, they pull the double-time feel back to the original speed.

Back at the original tempo, the drum pattern changes back to emphasizing the second and fourth beat, creating a broad, grandiose feel underneath the final statement of Chorus B [2:49]. A song that exemplifies this type of feel is “New York, New York”, as sung by Frank Sinatra, and Bradlee adds a couple quotes from the song in his accompaniment here.

For the final Chorus A [3:21], the group pulls back the energy again, ending with the same laid-back feel and simple accompaniment they employed when they began.

The main difference between Trainor’s original and the Postmodern Jukebox cover is the change in genre. To achieve this, Bradlee, Davis, and Tedeschi tinkered with three different elements: tempo, form, and instrumentation.

The slower tempo and double-time feel bring this version back to the big band era, and the addition of the 16-bar bass solo nods to jazz conventions. The trio also elect to add an extra Chorus B section after the bass solo, likely because it allowed them to come out of the quiet, low-register solo with the broad, “New York, New York” feel.

What really creates the genre transformation, however, is the instrumentation. Trainor’s original relies heavily on heavily produced sounds and vocal harmonies. All of these are stripped away in Postmodern Jukebox’s version, and the immediate result is a more classic acoustic quality.

The inclusion of the piano also changes the feel considerably. While Kate Davis plays the starring role, Bradlee’s style of playing is the real foundation. One of the many techniques he uses to achieve his time warp is to provide fills for all the spaces in which there is no vocal melody. His masterful additions here complement Davis’ powerful, soulful vocals without overshadowing them. The piano is an immensely versatile instrument and Bradlee is a wizard. With his talent, combined with that of Tedeschi and the award-winning Davis, it’s no wonder this song has become one of Postmodern Jukebox’s most popular covers.

Covers can be fun and inspiring, but going deep on comparing different versions of the same song provides a wonderful opportunity to exercise your listening skills. Even better, they inspire us to put our own creative twist into the songs we love. What will your own version of “All About That Bass” sound like?