Home » How To » Song Writing » Anatomy of a Song: The Three Most Common Song Forms

Anatomy of a Song: The Three Most Common Song Forms 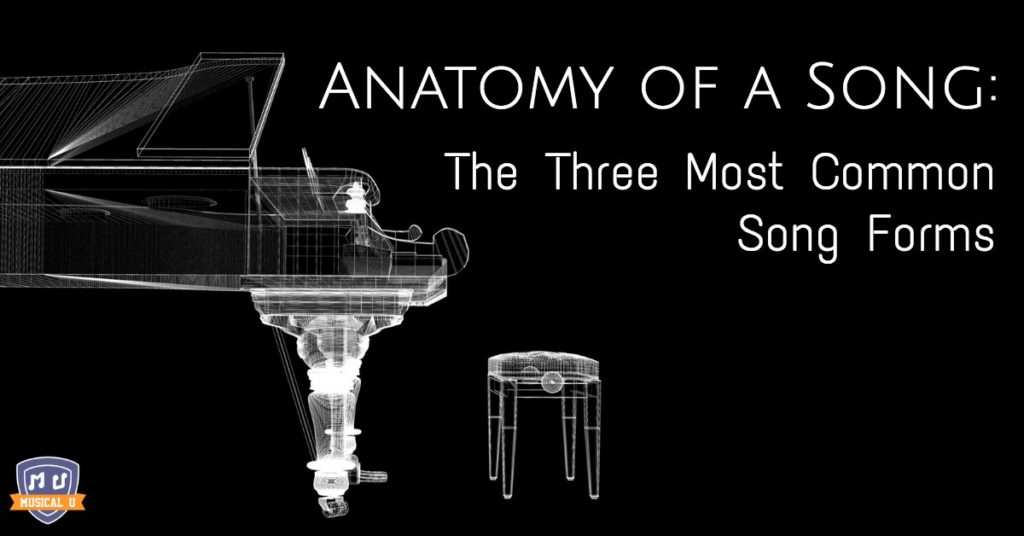 A song’s form or structure is its design and shape. It’s the way a song’s sections are organised and repeat – both to make listening easier for the audience and to make sure the song’s message is hammered home as clearly as possible.

There are all kinds of forms a song can take – and many well-known songs make their own rules entirely when it comes to structure. But today, we’re going to talk about the three most common song forms you’ll find in music today: verse-chorus form, refrain form, and AABA form.

The vast majority – probably at least 95% – of songs in the charts today are verse-chorus forms, so it’s likely that you have a good idea how they work, but let’s jump in with a bit more detail.

The Bread and Butter

There are two main sections in a verse-chorus structure: the verse and the chorus. They come in alternating pairs, something like this:

Verses and choruses work in pairs: that’s the central idea of a verse-chorus structure.  The verse’s job is to set up and build into the chorus, where the main idea of the song is expressed directly.

After a short intro – more on those later – the structure goes something like this:

Musically, you’ll also hear how the verses are much lower in intensity than the choruses, featuring a generally lower vocal register, a thinner texture, simple guitar strumming as instrumentation, and quieter dynamics – whereas the choruses tend to rock out more.

All of these dimensions ensure that the choruses are the main event in this song – the thing that really lands, and the thing you really remember – while the verses provide contrast and build up. This simple alternation of sections (though you’ll see there’s a double chorus at the end to round the structure off) is a really simple but effective way of structuring a three- or four-minute song.

Beyond the essential two sections of the verse and the chorus, lots of verse-chorus forms mix this basic structure up by adding other sections to keep things interesting.

One very common section is the bridge – sometimes called the middle eight or primary bridge – which typically goes after the second chorus, like this:

Let’s see how this works in an example, Katy Perry’s “I Kissed a Girl”:

Here’s the structure in a nutshell:

You probably noticed the same principles as we saw in “Complicated” apply: the lyrics and music work in verses and choruses, and the main lyrical theme and highest musical intensity are found in the chorus.

But in this case, we also have a totally new section: the bridge. And like most bridges do, this one has completely new music, and goes somewhere fresh in the lyrics: it starts by adding a broader perspective to the song, with phrases like “Us girls we are so innocent”.

The end result is that the bridge takes us away somewhere new, somewhere that adds an extra dimension to the song, before returning us back to the chorus.

Another section we should talk about is the pre-chorus. If you listened really closely in both “Complicated” and “I Kissed a Girl”, you probably noticed that somewhere in the second half of the verses, the instrumental texture started to build subtly but decisively. This is done, for example, by adding an extra guitar figure, a thicker drum beat, or a vocal register that starts to get gradually higher and more intense. Have another listen if you want to see what I mean.

If the job of the chorus is to be the song’s main event and the verse’s job is to lead up to it, you often find the verse beginning to grow in intensity in preparation for the chorus.

But sometimes, this job of growing into the chorus is done by a dedicated section called the pre-chorus, also called the climb or transitional bridge:

You’ll see what I mean in Train’s “Drive By”:

Here’s the structure of the first minute or so, in summary:

So what makes this a pre-chorus and not just a verse that builds towards the end?

Honestly – often you could argue a case either way. But in “Drive By”, I’d put my money on there being a pre-chorus at 0:48 because the lyrics take an abrupt turn in direction at “Oh, but that one night…” – the song’s story suddenly goes somewhere new. At the same time, the music jumps up in intensity as the drums suddenly get more insistent.

Generally, the idea that a song’s verse builds into the chorus is a universal one. But in some songs, where the writer wants a dedicated section that makes a bigger deal of this build, they use a pre-chorus to get everyone excited about the chorus to come.

And finally, two more sections we should cover: the intro and outro.

You probably heard in “Drive By” how the instrumental groove starts four measures before the vocals come in. That’s a really common way of starting a song, and gives us all a few seconds to get into the world of the song before the lyrics kick off.

There are a handful of different ways to end a song. Sometimes, you get an outro that is just a few measures of the groove over and over. Sometimes, an outro is just the chorus again with a repeat and fade out.

So that’s a quick look at verse-chorus forms. As we’ve seen, there’s no one single template for a verse-chorus form – just different sections you can combine in different ways, depending on what kind of journey you want the song to take the listener on.

Now, let’s move on and have a look at two other common song structures you’ll find in modern music.

Refrain forms are like compressed verse-chorus forms: instead of a separate verse and chorus, there’s a single repeated section (confusingly, often also called a verse) that finishes with one or two identical lines each time, called the refrain – like a mini chorus.

After an extended introduction, you’ll hear how each verse has the same melody each time, but different lyrics until you get to the final “hallelujahs” repeated over and over:

Well I’ve heard there was a secret chord…

Well your faith was strong but you needed proof…

Refrain forms work great in songs where the story is especially important – where you want to avoid having a chorus making a big deal of itself as part of your structure, and instead have a backseat interlude to add interest while keeping the focus on the verses.

The final form we’re going to look at is the AABA form. This structure pretty much does what it says on the tin, with two contrasting sections arranged in an AABA format. Here’s a very well-known example, The Beatles’ “Yesterday”:

In this tune, the core of the AABA form goes like this:

Then, as often happens, it continues with an extra B, then A. Finally, there’s also a short outro:

Here’s how the lyrics fit in with the AABA scheme:

There’s a few other subtleties we should mention. The two sections don’t take us on a big journey of highs and lows like the verse-chorus form does, but there are still some ways contrast is created in this form.

The A sections are more matter-of-fact and self-contained. Like the chorus in a verse-chorus form, that’s where the most direct expression of the song’s message is. The B sections, on the other hand, are more expressive and a bit more adventurous – the melody is more complex and the harmony is generally richer.

Similar to the bridge in a verse-chorus structure, the B in an AABA form is sometimes also called a bridge – the B section talks about something slightly different and has the definite feel of taking us somewhere new before returning to the A, the home base.

Anatomy of a Song

So there we are: three of the most popular songwriting forms.

As always, none of what I’ve said is a rule or a formula. There are tons of different ways to apply the ideas that these forms are based on.

The way you really master the ideas I’ve talked about here is analysing as many songs as you can to understand their form and structure. That way, you’ll pick up on tons of the subtleties on how these forms work, what they lend to a song, and how you can create new forms in your own songwriting.

Enjoy getting acquainted with the anatomy of your favourite songs!

How do you want to tell your story, song-wise? Do you want to re-emphasize a particular punchy idea over the course of your song? Go for the classic verse-chorus structure. Do you want to spin a rich narrative strung together by a single, powerful theme? The refrain form should work beautifully. 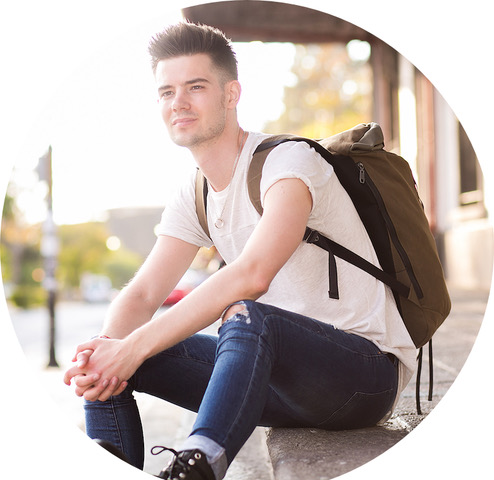 Ed Bell is the author of the popular book The Art of Songwriting and the creator of The Song Foundry, a goldmine of resources for songwriters. He has contributed articles to Making Music Magazine and Songwriting Magazine.