Home » Podcast » About the Power of Solfa

About the Power of Solfa

by Musical U Team | Podcast, Solfa 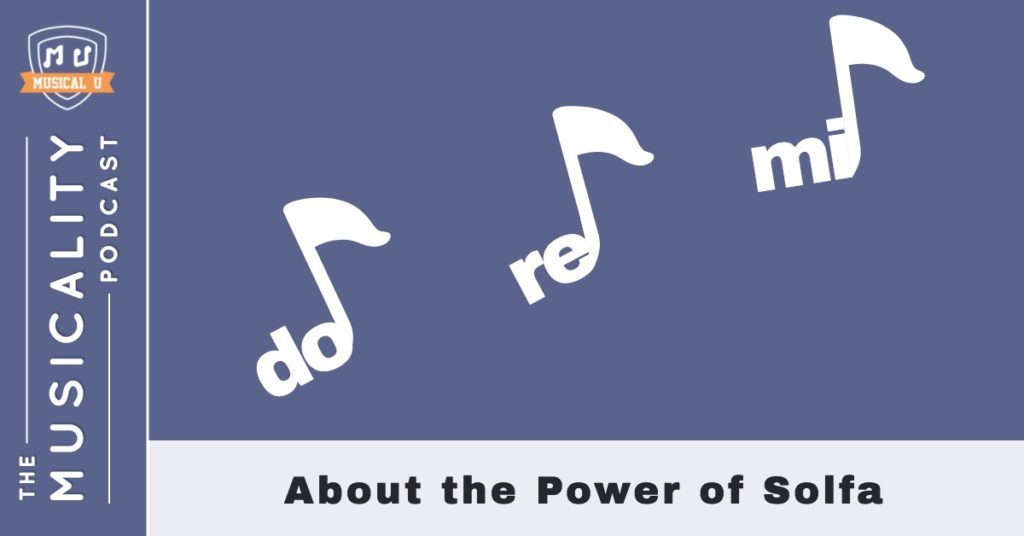 You’ve probably heard of solfa, solfège, or the “do re mi” system of music learning. But did you know it’s one of the most powerful ways for any musician to recognise notes easily by ear? In this episode we introduce solfa and why learning it could have a powerful positive impact on your musical life.

In my recent interview with Shelle Soelberg we talked about two tools she discovered which transformed the way she related to music and gave her much more freedom and confidence.

One of those was “solfa”, also known as solfege or solfeggio.

If you’ve listened to a few episodes of this podcast you probably already know that I discovered quite late in my musical life that there was something you could do called “ear training” that let you actually recognise and understand the notes you heard in music.

Solfa was an even later discovery for me – and I absolutely wish I’d learned it from the outset, the way they teach in Shelle’s “Let’s Play Music” system.

So I wanted to do an episode not to try to teach you solfa – that would be too much to try to cram in – but to simply say to you what I wish someone had said to me early on, which is: what solfa is and what it can do for you as a musician.

First things first: What is solfa?

Simply put, solfa is a system for naming each note of the major scale. You can apply solfa to minor scales and every chromatic note too, but at its core, solfa means you give each note in the major scale a short name: do re mi fa so la ti and do again.

There is a system called “fixed do” solfege, popular in France, where these names correspond to the letter names in music, so “C” is always “do”, for example.

To put it bluntly, that’s really not very helpful. It doesn’t add anything to the C, D, E naming we already have.

What is helpful is the system called “moveable do”. When people say “solfa” rather than “solfege” or “solfeggio”, they normally mean moveable do. In this system, “do” is always the bottom note of the scale: the tonic or “root” note. And that’s true whatever key you’re in.

And that’s what gives solfa its power.

You’ve probably heard of this “do re mi” system and you might have thought it was just for kids, or it was something obscure and theoretical. Nothing could be further from the truth. It is, in my opinion, the fastest way to get an instinctive and useful understanding of music by ear.

So why is solfa so powerful?

The core thing to understand is that this moveable do solfa system mirrors how we actually create and interpret music.

When you listen to a song, you recognise the melody and you experience the harmony based on the relative pitch distances between notes. It doesn’t much matter to you whether the song is in the key of C or the key of E flat. If you take a pop song and transpose it to another key, every note changes – but we still hear and recognise the same song when it’s played in the new key.

Solfa matches that relative interpreting of notes, because we’re always thinking in terms of how notes fit into the scale and relate to the tonic.

That means that every bit of practice you do learning solfa can immediately be applied in any key and used for any music you hear.

Now I want to take a moment to talk about solfa and intervals.

You might have come across interval recognition as another way to get this understanding of relative pitch.

Intervals are super useful and also powerful. They’re the way I started out with ear training, and in certain situations they’re still what I would recommend a musician to learn with.

But the trouble with intervals is that even once you master recognising each type of interval, it’s a whole other thing to learn to apply them to real musical tasks and to do it fast enough to be useful to you in your musical life.

Solfa on the other hand is useful from day one.

I think we’ll have to do a whole other episode on the pros and cons of solfa versus interval recognition, but to give you one simple example of what I’m talking about…

Suppose you hear a melody that goes:

If I wanted to play that by ear or write down the notes using interval recognition I would have to carefully think through each pair of notes and the interval between them [sing example, minor third, major second, etc. ]. AND then you’d need to think through translating those intervals to particular note names in a particular key.

That’s doable – but it takes quite some time to get fast with it, even once you’re good at recognising individual intervals.

With solfa on the other hand, my brain immediately recognises the patterns there and interprets it instinctively as: so mi re do, so. la. do

And once I’ve done that I can immediately write it down or play it in any key. In C major for example I know that would correspond to G E D C, G A C. Job done.

What else can solfa be used for? Well we had a great example recently inside Musical U, where our monthly topic in our Instrument Packs was “Scale Degree Recognition”, which is essentially solfa (though you might choose to call the scale degrees 1 2 3 4 5, etc. instead of do re mi)

Each of our Resident Pros had a different interesting angle on the usefulness of this skill.

In our Resource Pack for guitar, Dylan Welsh explained how you can use the different chords in the key to spot different scale degrees, and also a clever way to think about the non-chord notes in terms of their scale degree. In the pack for piano, Sara Campbell talked about using solfa to play melodies by ear, even if they go beyond the major scale. In our bass pack Steve Lawson applied it to chord progressions and basslines, whether you want to play them by ear or improvise your own lines. And in the singing pack Clare Wheeler discussed solfa for sight-singing music you haven’t seen before, finding your starting note when it isn’t given to you directly, and how you can use scale degrees for vocal improvisation.

So solfa is something you can use to play melodies and chords by ear, to sight-sing music, to improvise, and to write your own music.

It’s a beautiful system because it so closely relates to how we actually hear music. That’s what makes it so fast to learn and so immediately useful.

Solfa is a big focus for us at Musical U for these reasons, and if you want to learn more I’m going to put some links in the shownotes to help you take the next step. And of course if you want full training in this powerful skill we have our special offer for podcast listeners to join Musical U and get access to all our training modules including some fantastic ones for learning solfa quickly. You can find that at musicalitypodcast.com/join

So that’s it for this quick intro to the Power of Solfa. I really wish someone had sat me down early on in my music learning and introduced me to this system – so I hope this brief introduction inspires you to take a closer look at solfa and take advantage of it in your own musical life.