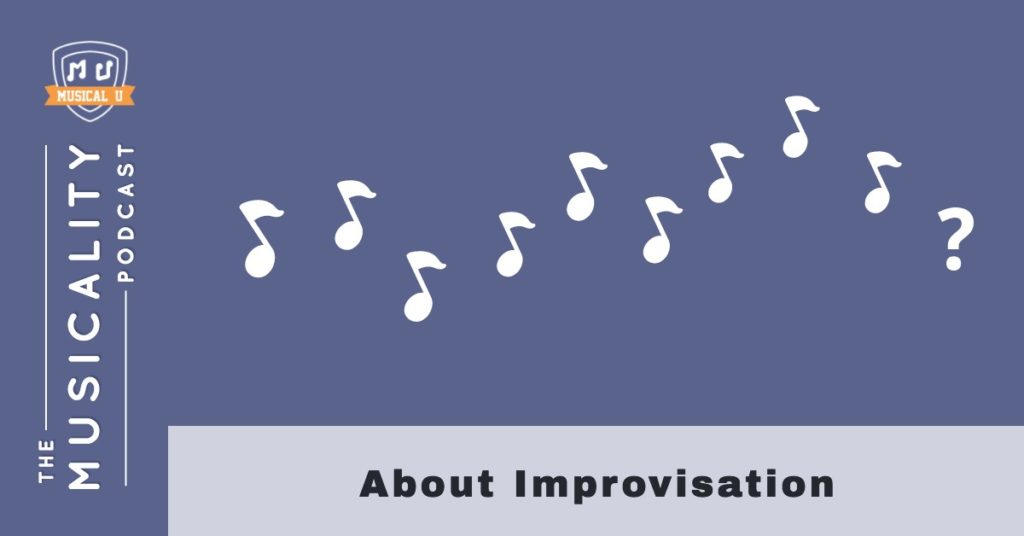 March is Improvisation Month here at Musical U, and what better way to kick off than with a crash course in the subject? In this episode of the Musicality Podcast, we share how to (and how not to!) improvise, the far-reaching benefits of this skill, and how it ties into the creative essence of being a musician.

I’ve been looking forward to this for a while and the team has been hard at work pulling it all together for a fantastic improv-focused month. We’ve actually been helping members learn to improvise in various ways since the start of Musical U – and that’s because whether or not you intend to improvise in the traditional sense, learning improvisation skills is central to all your musicality.

So don’t tune out if you’re thinking that improvising is just for jazz musicians, or that you never intend to play a solo on stage.

Improvising is fundamentally just about having creative freedom in music. Being able to come up with a musical idea in your head and bring it out into the world. And what musician doesn’t want to have the freedom and confidence to do that?

Today I wanted to kick off our improv-themed podcast episodes by talking about how to think about improvisation – because there are various schools of thought and approaches you’ll find out there, and if you follow the wrong approach then learning to improvise can be pretty frustrating. And it can reinforce a lot of those wrong assumptions about what improvising means, pulling you away from that true essence: that improvising is about bringing your own musical ideas out into the world, simple as that.

How not to learn to improvise

So I’d like to share with you the way we explain improvisation in our “Approaching Improvisation” module inside Musical U. First though, let’s talk briefly about the three most common approaches to improvising and why they typically don’t work well.

The first way is what I’d call “learning vocabulary”. This is particularly popular in the jazz world, and the idea is that you learn to improvise by mimicking the licks, riffs and runs of famous jazz musicians. You learn their phrases and build up your stock of improv vocabulary. You have a set of licks you know work over a dominant chord, ones which follow a ii-V-I progression, ones that work in a bebop style, and so on. When the time comes to improvise you pick a phrase or two from your learned vocabulary and that’s your solo.

Well, from the way I’ve described it and the way I talked about the essence of improvising a moment ago you can probably see the downside here: you’re not really coming up with your own musical ideas. It’s a bit like just memorising a phrasebook when you visit a foreign country versus actually learning to speak the language. Now don’t get me wrong, there is absolutely value in studying the greats, and we’ve talked previously on this podcast about the benefits of transcribing solos by ear. But if this is the only way you approach improvising you will ultimately feel very limited and not really experience any of the true creative freedom which improv should be about.

Okay, so the second common method then is a notch better. This one is particularly popular with blues, rock and jazz guitarists because of the easy connection to fretboard scale patterns. And the method is to learn some rules about what notes work when and then essentially choose your notes at random. With the right scale to match the chord progression and a bit of expressive playing like string bends and good use of dynamics, this can actually sound pretty good. And if you learn to connect with the underlying chords, something we’ll be talking about later in improv month, it can sound quite musical.

The drawback of this method is that it’s “improvisation by numbers”. You are kind of an improvisation robot, pairing a set of rules with a random number generator and hoping the result sounds good. This is the way I improvised back when I was playing guitar, and it was exciting because I was creating something myself – but I always felt a bit fraudulent with it because I never knew how it would sound until I played it. So I didn’t really feel like it was truly my creation. So this method works, and you can go quite far with it. But again, it kind of cheats you of the true essence of improvising, where you imagine what you want to create and then bring it out into the world for others to hear.

The final method worth mentioning is the brute force “do it and do it until it works” approach. Jazz musicians would call this “shedding”, where you go to the woodshed and you just play and play and play until gradually your brain mysteriously learns a deep connection with your instrument and then you can improvise on instinct. This is the romantic story of how great jazz musicians learned to improvise and it sounds a lot cooler than saying they studied the theory, memorised phrases and made careful use of scales and patterns! But clearly there are two big problems here. The first is that it’s a recipe for boredom and frustration. With no structured path to follow you have no idea if you’re making progress or if you’re learning as effectively as you could be. And once you do gain some ability to improvise on instinct it’s an incredibly risky endeavour. If you don’t understand how you do what you do it’s always going to be quite nerve-wracking to improvise because you’re trusting an instinctive ability that could fail at any moment.

So those are the three most common methods for trying to learn to improvise. To memorise vocabulary, to follow strict rules and patterns, or to just play and play and hope you mysteriously gain the instinct for improv. Each of these gets you some way towards true improvisation and each can be useful as part of learning to improvise. But hopefully you’ll agree that none of them sound exactly in line with what improvisation is truly all about.

How to learn to improvise

So how do you learn to improvise freely?

At Musical U we teach that true improvisation is essentially “playing by ear what you imagine in your mind”.

That’s why we’ve already been able to help our members with improvising, even though it’s only this month we’re launching our full Improv Roadmap – because we’ve had a solid and extensive set of play-by-ear training since day one.

That said, there are definitely some things which make improvising different to playing by ear, hence the need for some new training modules and a Roadmap. And I’d like to share a few of them with you now, so you have a sense of how this approach to learning to improvise can work.

The first core concept is the one I just mentioned: Improvisation is about connecting three things:

It’s the combination of those three that create a free improviser, and although in time you won’t need to consciously think through what you want to play before you play it, while you’re learning it’s really helpful to be mindful of these three separate components and work on each of them.

The second big concept is to use constraints and dimensions to create musical playgrounds for practicing improvisation. A constraint might be something like the scale you’re going to use, or a particular rhythmic pattern. The dimensions are then everything else you’re free to vary and experiment with. And the combination of constraints and dimensions creates a little playground where you can freely try things out in the safe knowledge that whatever you play will sound pretty good. We’ve found this provides a really great way for beginners to start improvising in a truly free and ear-guided way without it sounding like a random mess of notes or being so tightly rule-based that there’s no real creativity.

The third big concept is our framework of “Play/Listen” and “Listen/Play”. This is a great way to start building up those brain/ear/instrument connections in a creative way. It’s too much to really go into now – but maybe we’ll invite Andrew from the team on to a future episode to share a bit more about how this works. Or of course you can check out the Approaching Improvisation module inside Musical U for full details on everything I’ve been talking about.

Improvisation is about freedom

So that’s how we recommend thinking about improvisation. It’s not about memorising other people’s phrases, it’s not about strictly and carefully following music theory rules, and it’s not about blindly playing at random and hoping that years later something will click and you’ll have a magical instinct for improv.

Improvisation is about developing your musical ear to the point where you can take anything you imagine or want to create from your mind’s ear out into the world. It’s the heart of creative freedom in music and whether you use it for traditional on-the-spot improvisation like a rock guitar or jazz saxophone solo, or you use it as the basis to start writing songs or composing, or you become a fully-fledged improvisational artist like Steve Lawson, our Resident Pro for bass, whose entire career is based on improv – however you want to make use of improvisation, it is an ability that every musician deserves to enjoy as part of their musical life.

I hope this episode has given you some fresh ideas for what learning improv could look like for you, and stay tuned for our next episodes in Improv Month for plenty more inspiration and guidance for your improvisational journey!