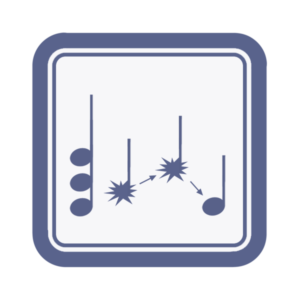 Learn to hear the inner harmonic structure of scales and use tension and release to add meaning to your melodies.

After completing this module: you will be able to improvise melodies that flow logically and meaningfully with chord progressions.

Tension and Release is an important aspect of music – and of life!

If you think about it you’ll find that the world around us is full of tension and release.

This is all tension and release.

In this module, we’re going to narrow our focus to a special kind of tension and release that happens when scales dance with chords.

In the Approaching Improvisation module, we looked at the idea of musical patterns and playgrounds.

Scales are a good example of a musical pattern and when we choose to stick to a certain scale for improvisation, we are creating a “playground” – a set of constraints (here, the notes in the scale) that give us useful boundaries to keep us on track with our soloing.

Chords and chord progressions are other musical patterns that can be chosen to add more “equipment” to our playground, as we saw in the Improvising with Chord Tones module.

One standard way of learning improvisation is to practice a particular scale that will “work” over a given chord progression, and then cut loose with that scale.

That scale can be a pentatonic, a major scale, a blues scale, a dorian mode, or many more. The hope is that if you learn to get all those scale patterns under your fingers, you will somehow know what to do with them when it’s time to jam.

Sure, you might pick the right scale that fits most of the chords in the song, and as you randomly play the notes from that scale they may sound okay.

But just because you made it to the playground, doesn’t mean you know how to use the equipment.

So if you really want

you’re going to want to have a command of each note of that scale and how it’s going to sound at any given moment. You’ll want to understand the inner harmonic structure that’s present in that collection of tones.

In other words, your playground experience is going to be a lot more fun if you learn all the ways you can play on the equipment.

One of the best ways to really feel this scale structure is to learn to perceive the qualities of tension and release that are inherent in the movement of the scale over the chords of a song.

One of the best ways to give meaning to your musical phrases is to give them a place to go. In the Improvising with Chord Tones we talked generally about “targeting” chord tones.

Many melodies consist mostly of chord tones. When you rely solely on chord tones for your melody, then your improvised line will sound very safe and stable. In a sense, it’s like the melody notes always “stay home”.  Nothing wrong with staying home, but sometimes it’s nice to get out.

The following exercises explore the next step after learning to hit the chord tones.

In order to internalise the concepts and sounds presented here, it is highly recommended that you take some time to really listen to the tracks several times over, and also to sing and play the notes on your instrument.

Listening for Tension and Release

When you play an A major chord like this it sounds pure and happy:

But see what happens when you play an A♭ major triad with an A in the bass just before it:

A♭ going to A

The A major chord then sounds so much better. This is an extreme example, but tension and release occur everywhere in music in varying degrees.

This was fun! Tried it with both clarinet and piano!
“I need much practice but felt myself improving!”

Get instant access to Harmonic Tension and Release (worth $30) and over 40 other training modules when you join now:

Get Harmonic Tension and Release and over 40 other training modules included in your Musical U membership when you join now: