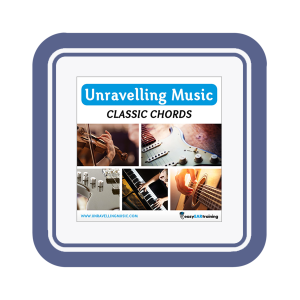 With the Unravelling Music albums you learn to hear more in music, just by listening to music.

Whether you play chords on your instrument or not, having a strong knowledge of common chord progressions and the ability to identify them by ear are powerful skills for any musician to have.

Building on the 3-chord patterns taught in the “Popular Progressions” module, this training module will teach you to hear and recognise the most popular chord progressions—those featuring the I, IV, V and vi chords—by ear.

Through listening to the pop piano of “Elton’s Journey”, new take on a classical style “Carribbean Canon”, modern dance track “Lady Robotika”, upbeat reggae “Ska-Ha” and the bluesy rock of “Pink Slips and Baby Shoes”, you will learn to recognise I, IV, V, vi progressions in a variety of forms.

As you practice with this album you’ll notice you can recognise these classic chord progressions in the music you hear every day!

The purpose of this module is to help you to hear chord progressions in real music so that you can play songs by ear or create your own improvisations and solos.

Since most modern pop and rock songs are based on the I, IV, V and vi chords, the tracks on “Classic Chords” use these four chords only—but across a variety of instruments, keys, musical styles, arrangements, and progressions. One even transforms these chords into a minor key to stretch your ears even further.

This will help you to build a robust and versatile ability to recognise these chords in use in the music you hear all around you.

The basic process for training with the album is this:

Step 2: Listen to the corresponding example tracks, read the explanations, and learn the chord progressions being used.

Step 3: Listen again to the full music tracks and hear the progressions in their real musical context.

Here’s an example for recognising a I-V-vi-IV progression, taken from Track 1, “Elton’s Journey”:

Step 1: Listen to the track.

Listen to the beginning of “Elton’s Journey”:

Step 2: Listen to the excerpt tracks.

As you listen, read the explanations of what you’re hearing.

Here’s the first excerpt clip and liner notes for Elton’s Journey showing how you can follow the progression in the bass line of the piano part:

Use your ears to hear the piano bass line playing the I-V-vi-IV progression (D-A-Bm-G).

Unlike in Lady Robotika where the root note is simply repeated, there are some changes in rhythm and pitches while the chord progression remains the same.

You’ll find you hear and understand much more than you did before!

That’s just one example from one track.

“The track notes were clear and concise, giving valuable information about each track and their variations from one another. Reading the notes and listening to the excerpt clips helped me hear the chord progressions in the main music tracks and connect the progressions to real music.”
“What I liked most about the Classic Chords album was the relationship between the written explanation and the audio examples. Extremely helpful.

“All the tracks are pleasant. I like the Caribbean Canon best.

This module has been very helpful. I am beginning to hear chord vi in music I listen to.”

Get instant access to Classic Chords (worth $30) and over 40 other training modules when you join now:

Get Classic Chords and over 40 other training modules included in your Musical U membership when you join now: